What a weekend it was in Ottawa! As someone who was fortunate enough to attend, the basketball was played at an extremely high-level and the final was an instant classic. Now that it’s over, it’s time to reflect on the team’s that made it to Nationals, how they did there and where they project moving forward. The U Sports offseason is unfortunately here, let’s kick it off with a review of an unforgettable weekend. 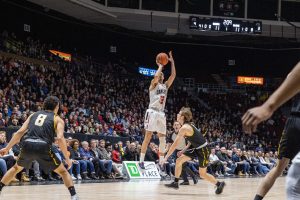 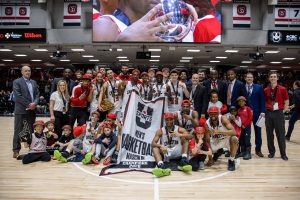 There isn’t a team in Canadian sports that face more pressure year-to-year than the Carleton Ravens. Anything less than a championship is literally a failure. When you come in winners of 14 of the last 17 National Titles, it’s not difficult to see why those lofty expectations exist. This weekend though, the Dalhousie Tigers came oh so close to knocking off the Ravens. At half, the game seemed lost. But, head coach Taffe Charles found a way to make the adjustments that led to a title in his first season. What’s most scary about this team though is how young their core was. Lloyd Pandi, the team’s lone OUA All-Star was a first year while Biniam Ghebrekidan, the championship game MVP is only a second year. Munis Tutu, Yasiin Joseph and Marcus Anderson may be graduating but, they still will have tournament MVP Isiah Osborne to go with the aforementioned, Pandi and Ghebrekidan along with a host of other elite talent. It’s safe to say the expectations in Charles’ second year will be just as high as this one. But then again, it’s Carleton. What do you expect?

To read about the final in more depth, click here! 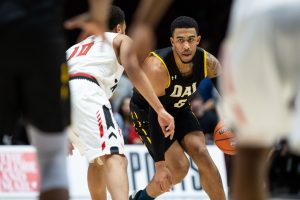 If you’re going to beat Carleton, you can’t fear them. For 20 minutes Sunday night, the Dalhousie Tigers were not only unaffected by the Ravens, it looked like the Ravens themselves were the team that was afraid. Then the second half came, and the Tigers simply didn’t have a good enough counter punch. Star Keevan Veinot was rendered ineffective in the second half as was a majority of the Tigers lineup. It’s incredible to think that a program like Dal is at a place now where losing in the National Championship game, even though they made it there, feels like they came up short. That in it of itself, is a complete testament to the quality of coach that Rick Plato is. This team will lose three seniors, Sascha Kappos, Jordan Wilson and Brent Martindale, three important rotational pieces, but they still return their three best players. Veinot had an unbelievable tournament and season, finishing as the AUS MVP, he certainly will come into next year as a favourite for the country’s player of the year award. Another key piece returning is Xavier Ochu who as the AUS Defensive Player of the Year, is a major part of anything they do. Finally, Alex Carson will be back. The king of the dagger three. As much of his team struggled in the biggest moments, Carson thrived. If they are going to be back, Carson’s ability from deep will certainly be a major factor. Overall, this edition of the Dalhousie Tigers had a historic season. They reached their first final in the national tournament after once again rolling the AUS. Next year the final is back in Halifax, don’t be surprised to see them back because if we learned anything this year, it’s that they fear no one.

The UBC Thunderbirds came into nationals arguably the hottest team in the country and did not disappoint. With stars Jadon Cohee and Manroop Clair leading the way, the Thunderbirds were able to bring home a medal for the first time since 2011. Any time a team can medal it’s a big deal but for a team like UBC whose two best players are seniors, it’s important to capitalize when you have your chance. For head coach Kevin Hanson, it was a banner year in his own right as he’s now the winningest coach in Canada West history, something he accomplished this season. Despite losing Cohee and Clair, Hanson’s squad should still be formidable with Grant Shephard, Grant Audu and Brian Wallack all returning next season. For now though, it’s time to reflect on an outstanding season for the T-Birds. A conference championship and a medal is a year worth celebrating, congratulations UBC! 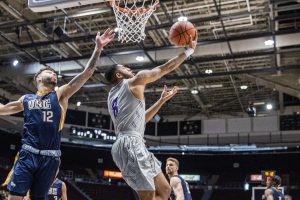 The 2019-20 Western Mustangs weren’t supposed to be here. Sure, they were loaded with senior talent like Nikola Farkic and Eriq Jenkins but, they were not supposed to be here. Yet, they were. In their first game of the tournament against Alberta, it appeared they were going to be the team just content with making it who gets blown out. Then a funny thing happened, they started making shots. By the end of the game, Alberta was in complete dismay as Jenkins, Farkic, Omar Shiddo and others banged three after three. All of a sudden, they were in the semi-finals. From there, they lost to a Carleton team that was a difficult match up and finally succumbed to Manroop Clair and UBC in the bronze medal game. It wasn’t the way they wanted to finish by any stretch but, by finishing as a top four team in the country, this program announced to the world just how good they are. Next season will be tough without the likes of Farkic and Jenkins, two players that define high character hoopers. Shiddo though is back and coupled with Aaron Tennant, Julian Walker and Aryan Sharma and others, Brad Campbell’s team will have a core that says they’re going nowhere but up. For now though, it’s time to celebrate a tremendous season. It was a season defined by proving people wrong time and again. Maybe after all the times they proved us wrong, we should’ve expected them to here after all? 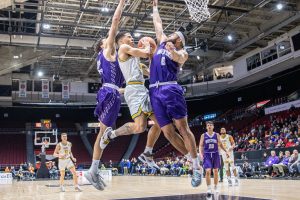 This year is going to sting for a long time in the capital of Alberta. To start the year one of the best players in the country, Brody Clarke, gets hurt and misses a majority of the season and yet, the team manages to pull together and lose just one game. With Clarke back, they completed their regular season title before focusing on the playoffs. In the conference final at home, the Golden Bears never could figure out how to stop UBC’s dynamic duo. So, they came to nationals as one of the most talented teams in the country but, disappointed nonetheless. In their quarterfinals match up versus Western, after dominating the first quarter, their inability to guard the perimeter at times came back to bite them as the Mustangs dominated them from three in a game that went from a sure win to a crushing defeat. Luckily, the team pulled together and led by seniors Clarke, Ivan Ikomey and Dwan Williams, managed to win the consolation side and go home winners of something. The reality for the 2019-20 Golden Bears, is it was supposed to be their year in a lot of respects and it just didn’t work out. Tyus Jefferson, Cole Knudsen and Adam Paige will all be back next season so there’s reason for optimism in Edmonton. Still though, this weekend and season will be remembered for what could’ve been and not what was, something that’s always difficult to accept. 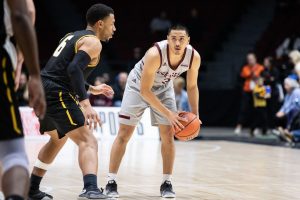 As the hosts of the tournament, the Ottawa Gee-Gees were under tremendous pressure. In game one they matched up with the Dalhousie Tigers and came extremely close to knocking them off. Unfortunately for those who dreamed of an all-Ottawa championship game, the Tigers flashed their championship moxy that came so close to delivering a title. So, Ottawa was forced into the consolation bracket. With seniors Calvin Epistola and Sean Stoqua leading the way, the Gee-Gees refused to let their season end and after a clutch Guillaume Pépin three, found themselves in the consolation final. But in the end, Alberta was simply the better team and as a result a disappointing sixth place result for the hosts. It was an impressive season for Ottawa that saw Epistola and Pépin blossom into one of the best duos in the country. Losing Epistola definitely hurts but, knowing you have three more Pépin seasons to go with an impressive core behind him should bring Gee-Gees fans excitement. For now though, they’ll just have to accept that 2019-20 wasn’t meant to be as the year of the Gee-Gee. 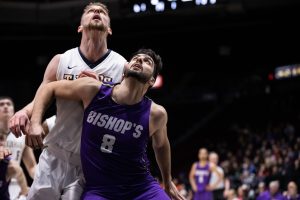 It was a weird season for Bishop’s. The kings of never knowing what to expect, they managed to win the RSEQ despite an 8-8 regular season record. At nationals, the UBC game was tough simply because although they got the looks they wanted, the ball just refused to fall. In the consolation bracket, they gave Ottawa everything it could handle and were a buzzer beater away from beating them. So, what the heck does this all mean? I mean the skeptic side would say 8-8 is more indicative of an under-achieving team and this playoff run was a fluke. For me though, despite the graduations of Abdul Kamane and Joany Castor Thadal, I truly believe in this team. Nervens Demosthene is one of the best players in the country so any time you have that, that’s a foundation for success already. They aren’t done there though as I really liked Jordan Thornhill and Connor Kelly’s game’s at nationals. Neither was afraid of the moment at all, something that truly matters in the biggest settings. Sure, Bishop’s had a weird year. But, they won their conference and any time a banner goes up in your gym, that’s a season worth remembering fondly. 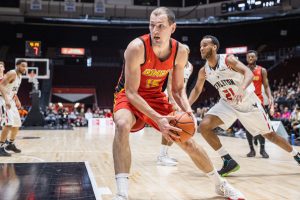 The quarterfinal match up at this year’s national tournament meant something different to the Calgary Dinos. Last season, the Dinos season ended at the hands of the Ravens. Not only was this the National Championship game, it was also the last game Andrew Milner played. Milner tragically passed away in an accident in the mountains last spring so this game against the Ravens, this year (that his parents made the trip from Nova Scotia for) had a different feeling to it. Calgary competed admirably but the home Ravens were too much for them. In the consolation semifinals, Calgary matched up with rival Alberta where for the third time this season the Golden Bears knocked off the rival Dinos. With that loss, the season for Calgary was over. Although it’s their lowest finish since 2016, the season was an overall success for coach Dan Vanhooren. Vanhooren was able to manage a second place finish in the Canada West regular season and a final 8 bid despite losing four of their five leading scorers. It was supposed to be a rebuilding year and the Dinos found a way back to the tournament, flexing the strength of their program. Next year National Player of the Year Brett Layton is back and to go with Mason Foreman, Ezeoha Santiago, Max Eisele and the rest of a team that features zero fifth years, will be a national title contender once again. They didn’t get the end result they wanted this season but, if the development they achieved in another impressive year sets up a national title run next year, I’m sure Vanhooren will take it.

That feed by Max Eisele 👌