U SPORTS FINAL 8- TUTU AND GHEBREKIDAN SAVE RAVEN’S SEASON 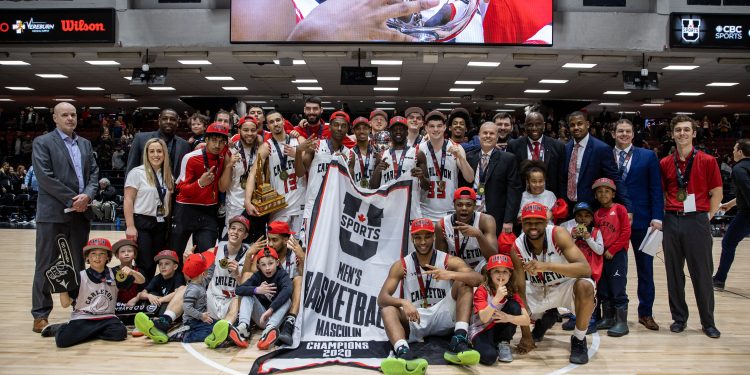 1:44 to go in the National Championship game and the Carleton Ravens are inbounding. Trailing all game, the Ravens are in unchartered territory. Yet after a furious second half comeback, they have managed to tie the Dalhousie Tigers at 65.

The ball is inbounded downlow to first year forward Lloyd Pandi who spots fourth-year guard Munis Tutu on the wing. At the half Tutu was 0-3 from the field but the Windsor native came out in the second half on a mission.

As Tutu catches the ball, he gives Xavier Ochu a quick jab step. The AUS Defensive Player of the Year doesn’t bite at all. Tutu has one option.

The guard rises up, and in Ochu’s face, steals the Tigers first championship with a dagger three that causes most of the 4,103 in attendance to explode.

It didn’t matter that the first half was a colossal disaster, first-year men’s Ravens coach Taffe Charles found a way.

Carleton’s adjustments were two-fold. On offence, they had to move the ball more. Dal’s defence had caused the vaunted Ravens attack to stagnate. In the second half was a different story though as player of the game Biniam Ghebrekidan and Alain Louis helped catalyze the Ravens offence.

Defensively, Tigers superstar and AUS MVP Keevan Veinot was dominating the first half. In the second, the Ravens went to old reliable to save their season. Marcus Anderson played the half of defence of his career, going out in style as a senior by locking Veinot up to the tune of zero points on zero of eight shooting.

Tigers standout Alex Carson did all he could to fight the Ravens off in the second half, nailing multiple seismic, crowd silencing three-point shots.

In the end though, the story as old as time it seems continued. The Carleton Ravens found a way to win.

Carleton is now an absurd 15-0 in National Championship games and take home the title for the 15th time in 18 seasons.

On their bench, Dave Smart may be retired from coaching in title but not in his heart. The Ravens legendary coach was as animated as ever, helping to will his beloved program to another championship.

For Tigers coach Rick Plato, the loss will be difficult to swallow. For the second straight season Dal had Carleton beaten but failed to finish the job. The good news though for the program is that all of Ochu, Veinot and Carson will be back next season.

Alas, that’s where we are once again with everyone in the country not named Carleton.

There’s always next year. Unless you’re the Ravens.

Congratulations to the Carleton Ravens on another banner season!

For the better part of the past month, Jadon Cohee and Manroop Clair have been on an absolute tear. The two seniors in their final month put together a playoff run to remember in the Canada West eliminating both Calgary and Alberta in their home gyms to win the conference title. They followed that up with an outstanding effort against Bishop’s in the quarterfinals before ultimately succumbing to the Dalhousie Tigers. Today though, in their final university games, the two put on a show. Clair dropped 39-points and ten rebounds while Cohee put up 20-points and five-assists as the two go out medallists in the national tournament. For Western, Omar Shiddo completed his season with 29-points and will surely be a force next season in his fifth and final year. Two Mustangs who finished their careers Sunday were star point guard Nikola Farkic and Eriq Jenkins. The two will be remembered as bonafide winners of the highest order. It may be UBC going home with the medal but the Mustangs more than proved themselves in what was a season to remember in London. Meanwhile out on the coast in Vancouver, a banner season comes to an end for a Thunderbirds team that left everything on the floor here in Ottawa.

Led by Ikomey and Clarke, Golden Bears go out on winning note

A win to cap off the year!

Thanks to all the support all year long!

In Ivan Ikomey and Brody Clarke’s final games for the University of Alberta, the two put on a show. Ikomey poured in a game high 21-points while Clarke had 16-points and 10-rebounds to help defeat the host Ottawa Gee-Gees in Sunday’s consolation final. The consolation final was also the final game of Calvin Epistola and Sean Stoqua’s Gee-Gee careers. It was a game with a feeling of finality at the Ravens Nest as it saw both team’s seasons end, and the careers of multiple U Sports stars careers finish as well. Congratulations to all on outstanding seasons and careers!