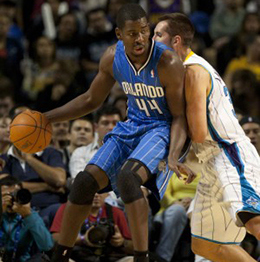 After struggling mightly from the field in game one of the Orlando Sumer League, Andrew Nicholson bounced back with an effort that Orlando Magic coaches and scouts are accustom to seeing from him.

Nicholson led all scorers with his game-high 19 points, adding four rebounds and three assists in the Magic’s 79-78 loss to the Oklahoma City Thunder on Monday morning.

Nicholson was also adept at getting to the free throw line, as he appeared six times at the charity stripe knocking down 83%.

Boston Celtics forward Kelly Olynyk, who was coming off an impressive 25 points, seven rebounds performance was looking for an encore in game two of his Summer League schedule. The BC native followed up with 13 points, six rebounds and three assists  in Boston’s 93-63 blowout win over Detroit.

Myck Kabongo didn’t start game two for the Miami Heat like he did in their first game. The Heat defeated the Brooklyn Nets 93-86 for their first Summer League win.

Kabongo played 12 minutes in the win, but with the improving play of Cedric Jackson (Cleveland State) and Ian Clark (Belmont) the Canadian point guard will have his work cut out for him to prove he can make an NBA roster.