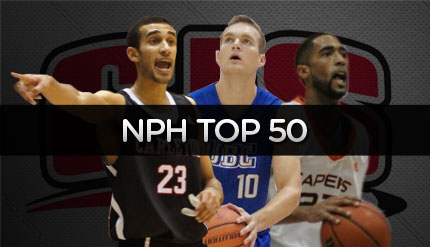 We are extremely excited to introduce to Canada the first OFFICIAL segment of the NPH TOP50 CIS National player rankings. As you will see, there is no shortage of talent across the country, making it difficult to compile the TOP50.

Three drafts, several discussions among the NPH National Panel, as well as added insight from around the league and here we are.

Debate is expected and welcomed!

The NPH TOP50 takes into account multiple factors including production, skill set, resume, and long-term potential (in that order). The purpose of these rankings is to enlighten the country, and international scouts, GM’s and professional team owners on the talent that Canada has to offer at the University level.

Spearheading the NPH TOP50 is none other than Philip Scrubb of the CIS power house, otherwise known as the Carleton Ravens. Not much to debate here. If you ask coaches and enthusiasts around the league, most will agree Scrubb belongs at the top. A two-time CIS National Champion, former CIS rookie of the year and Nationals MVP, currently in his third year. Enough said.

The walking triple double that is James “Jimmy” Dorsey of the CBU Capers currently owns the #2 spot. There is nothing on the floor that Dorsey can’t do. The reigning AUS MVP has his Capers playing at a high level and there is one piece of hardware left to chase…a CIS National title.

Team success breeds individual success. And for that we have Tyson Hinz, former Nationals MVP and an integral part of the Ravens winning ways at the #3 spot. A versatile forward with an inside-outside game, consistently causing mismatch problems.

Owen Klassen has arguably the highest cieling on this list due to his combination of height, athleticism and shooting ability. You could expect Klassen to end up with a professional contract overseas; in the meantime, his Acadia Axeman are looking like a team that could make it to March; a well balanced unit with no shortage of fire power.

Baker provides great versatility on the floor with the ability to rebound, pass, and score in a variety of ways. He possesses the physical attributes as well as the skill set to play at the next level. He leads Alberta, one of the top teams in the country in multiple categories including points, rebounds, and assists. Baker holds the #5 spot in the NPH CIS TOP50.

Only one freshman in the country makes the cut, and a big splash at that, with Shaq Keith currently owning the #10 spot. We believe Keith is a special talent with superb upside. In addition, he has produced at a high level for the 7-0 Capers. Some could argue this rank is too high for the 6’5 shooting guard, espiecially as a freshman. However, we believe he is THAT good with great room to climb. We have had the opportunity to witness Keith’s maturity on and off the floor, the main reason that triggered this decision.

As the first half of the season is in the books, you could expect things to get heated as we enter the second semester. Players will be rested and back to full health as teams prepare to make their playoff runs. As you will see, the NPH CIS TOP 50 will fluctuate throughout the season based of performance, and players breaking out of their shells.

One thing is for sure…the talent that we have at the Canadian university level is nothing to sneeze at. The talent is REAL, and is thriving at a rapid rate!

The much anticipated NPH CIS Top 50 is here to stay. Release #2 will be  in February…cheers!