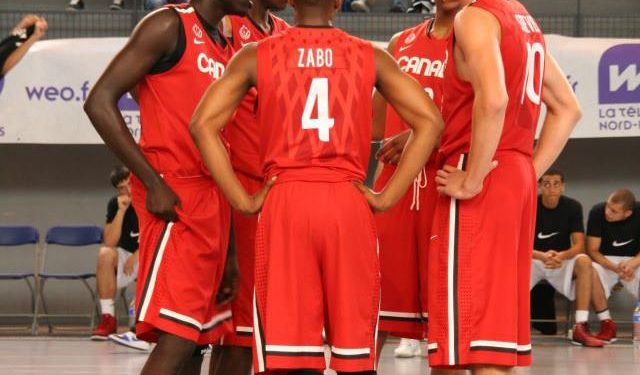 Marial Shayok (Ottawa, ON) and Kevin Zabo (Gatineau, QC )led the way for Canada, as they both had a game-high 16 points in the game, while Chris Egi (Markham, ON) grabbed a team-high seven rebounds in the victory.

In the first quarter, it was easy to tell that both teams were nervous in the opening game of the FIBA U17 World Championship. With Canada playing the hosts, Lithuania, the arena was packed with supporters and it led to a total of 15 turnovers in the opening frame. Lithuania took the four point advantage to the second quarter, 17-13.

In the second quarter the teams continued to turn the ball over a lot. Canada was down by as many as 13 points late in the quarter, but Marial Shayok hit a jumper  late in the frame to cut the lead to eight, at the half.

Into the third quarter, Canada opened on a 12-2 run to take their first lead since the opening quarter, 42-40. From that point on, it became a seesaw battle as no team was able to extend the lead larger than two points. Tyrell Bellot-Green (Toronto, ON) hit a shot in tight with under a minute to go in the quarter to tie the game at 47-47.

In the final frame, Lithuania was able to create separation as they went on a  7-0 run to gain the 54-47 lead. With 1:41 left in the game, Lithuania nailed a three-pointer to take a 61-56 lead. With 1:17 left in the quarter, Chris Egi was able to steal a pass and dunk it to cut the lead to three points. Marial Shayok with 10 seconds left took a three-pointer that banked in and sent the game to overtime.