What Canadians Showed Out in the First Weekend of March Madness? 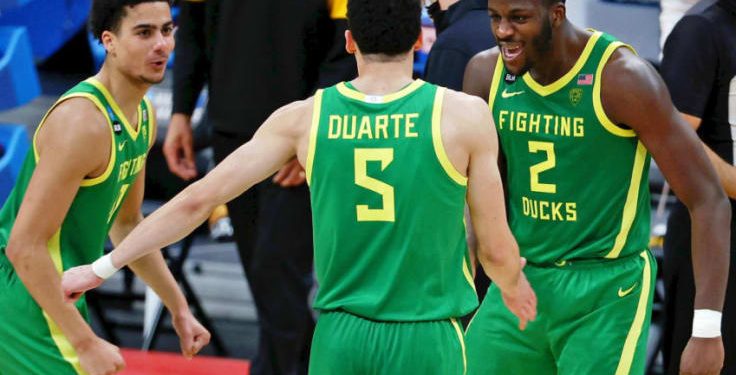 Boy oh boy was it nice to have March Madness back this weekend. Can we all collectively agree to never cancel this tournament again?

Anyways, Canadians made a big impact all weekend long for a series of teams up and down the bracket.

After his game against #10 VCU was cancelled due to COVID-19, #7 Oregon’s Chris Duarte continued to be the class of Canadian NCAA hoops this season in the Ducks win over #2 Iowa. Duarte poured in 23 points, 7 assists and 3 rebounds Monday afternoon.

Not to be outdone though was his Canadian teammate, Eugene Omoruyi who added 17 points, 6 rebounds and 5 assists to the Ducks’ upset win. In a running theme of recent tournaments, Canadians showed out for Dana Altman’s Ducks squad.

Canadians at Oregon, in March. They just go well together. @NphScouting

Speaking of the PAC-12, Maurice Calloo of #12 Oregon State put on a show this weekend from distance. In the Beaver’s two upset wins over #5 Tennessee and #4 Oklahoma State, Calloo went a combined 5-8 from behind the arc. Unfortunately though, Calloo’s dominance took out another Canadian’s team in Matthew-Alexander Moncrieffe.

This wasn’t the only matchup in the round of 32 that saw Canadians go head to head.

Quincy Guerrier and #11 Syracuse took down Gabe Osabuohien’s #3 West Virginia squad in a hard-fought game to advance to the Sweet Sixteen. Guerrier put up 12 points, 7 rebounds and 5 blocks while Osabuohien went down with everything he had giving the Mountaineers 19 minutes, 2 points, 9 rebounds, 3 assists and countless hustle plays and great screens.

Guerrier is one of nine Canadians who will advance to next weekend. Maybe of note the most is Andrew Nembhard.

The former Florida and Montverde guard is a key starter and contributor on the tournament’s lone undefeated team, #1 Gonzaga. If both Gonzaga and Oregon take care of business, Duarte and Omoruyi will matchup with Nembhard and the Zags with a bid for the Final Four on the line.

Of course, if we learned anything in this weekend full of upsets, nothing in this tournament is achieved by looking forward. All we can do is sit back, watch and celebrate all the great things these talented young men do every time they touch the court.

Oh, and be thankful for the fact we actually have the tournament after a year where it was taken from us.

Congratulations to the Canadians who have competed so far, here’s to more success and good luck in the rounds to come.

How’d the Canadians do this weekend?

From the first-ever NPH Showcase to the ...