When you take over a previously fruitful program as a new head coach, there’s a fine line between bringing in your own brand and eliminating the things that made the team successful before you arrived.

This balancing act is what Joe Enevoldson, University of Fraser Valley’s new Men’s Basketball head coach, will have to work through this season.

For a relatively new program by U SPORTS definition, the Cascades have impressively reached the postseason in 11 of their 14 seasons since joining the Canada West. Despite this success, in a mutual decision with then-head coach Adam Friesen, the university announced that they were parting ways after the 2019-20 season.

In taking over a program with a proven track record, Enevoldson knows he has a fair amount to work with coming in.

“If it’s not broken then I don’t want to fix it,” said Enevoldson. “I just want to change it, mold it, evolve it.”

Enevoldson comes into the program a proven winner. For the last four seasons, he has guided the Douglas College Royals to medals in their PACWEST conference tournament.

This season may have been his best at Douglas but unfortunately the COVID-19 pandemic intervened. The CCAA national tournament was cancelled before the number one ranked Royals could compete for a championship. 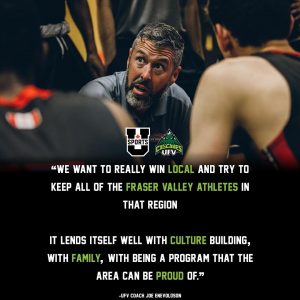 He knows replicating the success of being a perennial conference powerhouse will be a challenge at the next level but Enevoldson believes in his new team’s chances.

Enevoldson is the kind of coach that puts pride and extensive effort into the defensive end. Under his coaching, Douglas College was known as a hard nosed team on the glass that was far from fun to play against and was always prepared.

Similar will be expected of the Cascades by their new head coach.

“I think (defence), it’s a controllable aspect,” said Enevoldson. “I mean you can run the best system in the world but if you’re not shooting the ball well on one day, it’s going to be a nightmare for you. So, you have to guard, and you have to be able to rebound, those are your two controllables.”

Enevoldson is bringing in Jiordano Khan and Cameron Morris, two of his stars from Douglas College, to help establish this defence-first mentality at UFV. Khan and Morris are far from just culture builders though and both are expected to be high level U SPORTS contributors right away.

Working just 30 minutes down the road from UFV at Douglas, Enevoldson knows all about the level of talent in the area. He strongly believes a major key to success for his program is keeping that talent home and playing for the Cascades. Khan and Morris, both products of nearby Burnaby, are prime examples of the talent rich area around the school.

“We want to really win local and try to keep all of the Fraser Valley athletes in that region,” said Enevoldson. “It lends itself well with culture building, with family, with being a program that the area can be proud of.”

With high level talents like 6’10 star brothers Matthias and Zach Klim playing locally and coming to UFV, it’s easy to understand Enevoldson’s passion for the talent of the valley.

Though UFV has made the playoffs regularly since joining Canada West, they haven’t been able to win their elusive first conference title. There’s no doubt that a championship is in Enevoldson’s vision for the program.

“That’s kind of the goal coming in is we want to on a yearly basis be a playoff team and contend for a Canada West final four,” said Enevoldson. “Eventually build towards contending at the national tournament on a consistent basis.”

Though no title will ever be guaranteed, fans can expect UFV to be a tenacious defensive stalwart in the conference quickly. How do I know? Because Enevoldson is a passionate defensive coach looking to make his mark in Canada West.

“The biggest thing when you enter a new program is you do want to make it yours regardless of whether it’s been successful or not,” said Enevoldson. “The mark of any good business opportunity or any good business employee, is you always want to leave the spot better than when you got it.”

Coach’s Scouting Report: Can guard. Three and D guard looking at him to come in and who again can lock up guys. He obviously has played against some good players in the NPA. He’s just a guy who’s going to bring a level of tenacity that I think we don’t always see in BC.

NPH Scouting Report (Mickias Mikre): Athman’s ability to disrupt and contain playmakers on the perimeter should translate right away. He’s an underrated playmaker and is incredibly efficient on offence. He led the NPA in points per possession and assist-turnover ratio and was one of the top high-volume three point shooters in his class.

Coach’s Scouting Report: He’s going to redshirt and he’s a long-term guy. We’re going to wait to see how he develops, comes from pretty good lineage, a basketball family. Another long wing who’s got some physicality to him.

Coach’s Scouting Report: 6’10 piece to the puzzle. The defensive player of the tournament in the provincial tournament. Can shoot a fifteen-footer. We’re looking at year 3,4,5 them stepping and being big contributors in Canada West.

Coach’s Scouting Report: 6’10 piece to the puzzle. First team all-star in the provincial tournament. Can shoot a fifteen-footer. We’re looking at year 3,4,5 them stepping and being big contributors in Canada West.

Coach’s Scouting Report: Jake brings a very definable skill set in a great shooting touch to our program. Having a lot of experience on a very formidable Lane program we look forward to seeing what he brings on a day to day basis.