CBG on CIS Rankings: All Signs Point to Ontario 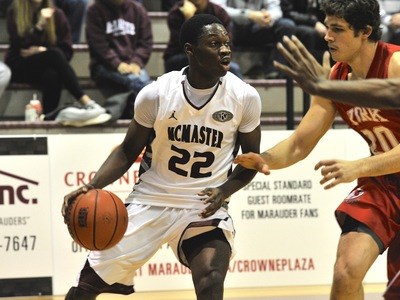 Painting the Canadian flag with the colours and design of Ontario’s would probably be tricky, but this might be where we’re headed.

The Canadian Interuniversity Sport (CIS) released its first top 10 rankings of the 2014-2015 season, and there’s certainly a bad pun to say about it.

Something like, “Ontario finally finds a top 10 that meets its expectations it has for it.” Or maybe it’s better with a headline? “Ontario and scraps for everyone else”? (I don’t know, this isn’t perfect but there’s definitely something to say.)

All #hottakes aside, the CIS certainly did release its first top 10 of season—and a quick glance leaves me with plenty of things on my mind.

The CIS believes in Ontario

For the past few years, the Ontario University Athletics (OUA) has not so quietly been the best basketball conference, with perhaps the toughest division (i.e. OUA East), in the country. The conference has undergone a transformation (read: realignment) this season, but as long as the Carleton Ravens and the Ottawa Gee-Gees still play in this conference—and they do—then it likely is again the best in the country.

The conference also is home to the 10 of the last 12 national champions in Dave Smart’s squad at the Ravens’ Nest. So yeah, there are a lot of things to love about the OUA, and the CIS loves them all.

And yet, could the CIS love the OUA a little too much? One of the conclusions of this preseason top 10 is that the national governing body of university sports in Canada has somehow decided to award Ontario the—not one, not two, not three, not four, but—five top teams in the country.

In the CIS’s collective mind, Carleton, Ottawa, the Ryerson Rams, the McMaster Marauders and the Windsor Lancers are all better than anyone else in the CIS and, well, let’s spend some time on that fifth team.

The Lancers finished last season at 16-6 and made it to the Wilson Cup semifinal. I have faith in Windsor head coach Chris Oliver, but he loses his three most important players in seniors Lien Phillip, Enrico Diloreto and Josh Collins.

I believe in Windsor’s ability to reload without rebuilding, but at some point these three losses have to mean something. Something like maybe not a top 10 preseason nod.

No love for Quebec?

Rounding out the top 10 are the Cape Breton Capers, the UBC Thunderbirds, the Saskatchewan Huskies, the UNB Varsity Reds and the Victoria Vikes. In other words, the CIS has no love for Quebec and its RSEQ.

Of course, this is not a new problem. Every year, the RSEQ teams have an uphill climb to convince folks that they deserve a seat at the big boys’ table once the Final 8 rolls around—or rather, to convince them that they deserve more than one seat, since at least its champion is guaranteed a spot. We all know the arguments by now. “Oh the ‘Q has only five teams”… yes, and that’s why its teams have traditionally strong out-of-conference schedules. (And fared well in said schedules, too.) “Oh, the ‘Q hasn’t really fared well at the Final 8”… yes, but really has anyone beyond the mighty Ravens?

Look, this isn’t even really a true problem, as the CIS rankings will flip-flop throughout the season. But it is hard to overcome a first impression. And right now, that first impression says that Quebec teams really aren’t good enough.