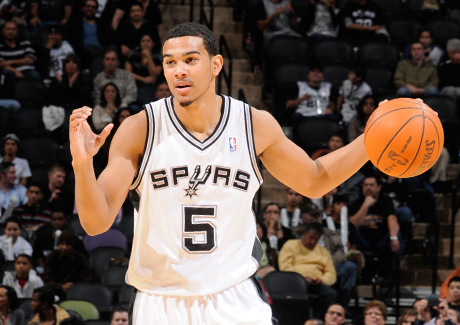 For as long as we’ve been tracking Cory Joseph (since his days at Pickering High), the 6’2 lead guard has developed a strong reputation for winning.

When the San Antonio Spurs were donig their research for the 2011 draft, management was well aware of his pedigree.

Just a winner…that’s all he knows.

In game five of the Western Finals, Joseph came off the bench to provide some inspiration in the form of what many are saying was the play of the series against OKC.

“I just try to stay ready…basically this whole year or whenever in the playoffs, whenever my name is called, I just try to go out there and give it 100,” Joseph told KSAT.com

In seven minutes of play, Joseph scored two points, dropping Russell Westbrook, and following up with the pull-up mid-range jumper.

With an intense championship series ahead against the Miami Heat, and Parker nursing his ankle, CJ’s name could be called once again.

And as he has proven time and time again…he will be ready.

Where Will Andrew Wiggins Land in the ...