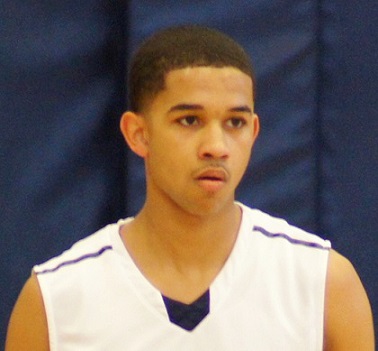 His name is well known among NCAA coaches and is slowly building in Canadian basketball circles. His name is Howard Washington Jr. and to put his game into perspective very quickly, Tyler Ennis.

Howard Washington has quickly made the climb to the top of the Canadian 2016 class after five sightings.

Right across the Peace Bridge that borders Niagara Falls, Ontario and Buffalo, New York, a young man with dual citizenship (Canadian/American) is excelling at rapid speeds and is one of the next “big time” names to keep tabs on.

We have been tracking Howard Washington Jr. since the beginning of the high school season, but his debut to the Canadian public may come when he represents the maple leaf this summer with mostly likely the Canadian Junior National Team.

Howard Washington Jr. has been receiving recognition for his talents through the many NCAA programs that have offered this Canisius High School sophomore a scholarship.

There are currently 12 offers to be exact, along with a lengthy list of others who are getting in the mix.

Other programs getting into it with Washington Jr. include Ohio State, Rutgers, Alabama and Syracuse, to name a few.

“Growing up in up-state New York, I’ve always been high on Cuse. I grew up watching and learning from guys like Jonny Flynn, Michael Carter-Williams and recently Tyler Ennis.”

Maybe it’s because Tyler Ennis’ high school career is still fresh in mind, but the comparison makes so much sense. Point guards come dime a dozen; but point guards with this kind of poise and ability to run a team make them special, special enough to run our Canadian National Team at the Cadet or Junior levels.

The comparison becomes less far-fetched, when learning that there is a relationship between the two. Junior and Ennis are quite close and have been in contact all through the regular season.

“He’s a really smart and mature person, so I can learn a lot from him as a player and as a person, we were texting and talking with each other all season.

Right now Washington Jr. is laser focused on continuing to add to his game.

“I’ve been hitting the weights consistently and just adding strength. There’s a been a difference this year for sure as I’m able to take hits and make plays through contact.”

While evaluating Howard Washington Jr. both during the high school season and on the AAU circuit with Albany City Rocks, he further proved to be a positive impact each night, regardless which style of offense is being played. Just two weeks ago in Virginia at the EYBL, Washington Jr cemented himself as a top 10 Canadian prospect in the 2016 class.

Truth be told Howard Washington Jr. could play and hold his own with the U18 team and affectively help them qualify for the 2015 U19 World Championship. He has received invites to both training camps, Cadet and Junior men’s teams.

As it stands, and as his school schedule allows, “Howie” will join forces with the cadets to form a superb backcourt tandem if Jamal Murray also chooses to play with his age group. There is also the possibility that both choose to play up in age group with the Juniors.

Under pressure full court, or having a firey guard on him in a half-court setting, his demeanour remains the same and is able to make plays off the dribble.

A conversation with his father Howard Washington Sr. cleared up why he’s so ahead of his age.

His patience and control of the game reflects onto teammates and gets them in a confident groove.

“I like making my teammates better, getting guys involved first will help the team overall. I have no issue scoring the ball when the team is in need of it.”

A well rounded offensive arsenal makes him a threat at any point in the game. Prep schools all over America are trying to get Howard Jr. on their campus for his Junior year.

Powerhouses like La Lumiere and Montverde Academy are teams that have experienced Canadians and are looking to dabble more into the surge of talent from North of the border.

Ohio State will be picking up Montverde’s D’Angello Russell to run the point for the Buckeyes in the 2014-2015 season, which leaves a void for the National Champions at PG. Howard is that piece to keep things for Montverde safe at the position.

“I’m really focused right now on just making improvements, not really in a rush to make decisions. We just qualified for Peach Jam, so I’m in the gym everyday to make sure we’re ready.”

North Pole Hoops will be at Nike’s Peach Jam and all National Team Camps to continue tracking one of the deepest classes (2016) Canada has seen in years.