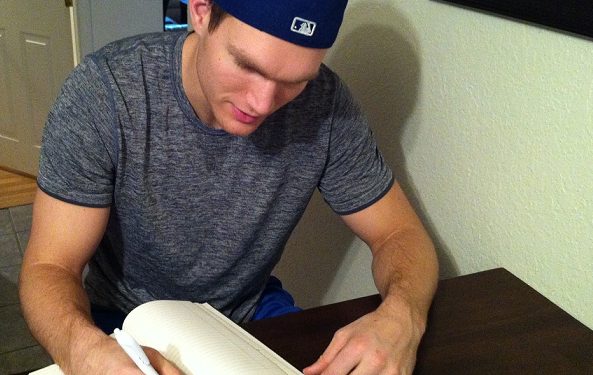 I hope everyone had a great holiday break and is currently enjoying the same rude awakening back to reality that I am. We just got back from 10 days in Hawaii last night and this morning it was back to practice and class. The month layoff we get from league games in the CIS is always hard mentally (and physically) but this year it was even harder with Hawaii extending my annual trip to la-la-land. But hey, beggars can’t be choosers!  Here we go..

Last time we talked exam season was just starting up. I got through those alive, although barely. It’s very difficult to stay motivated in school your last year there is so much on your mind. After exams were finished up the team dispersed to our different hometowns for about eight days. I tell you what…Home cooking, no laundry, no books and that mental escape from reality is just what the doctor ordered.

Unlike the NCAA, the CIS doesn’t have as strict of guidelines on when you can and cannot practice; in fact, there pretty much are no restrictions. We have been going solid since the beginning of August so that time to clear your mind and get away from the game for a bit is huge.

Coach Hanson had us back the day before we took off for Hawaii to practice and let me tell you, it was not pretty. Full court defensive slides, suicides and Kev’s daily special of 1-on-1 closeouts on the best of days are a doozy; let alone when it feels like you are hauling Santa Claus himself behind you. We got through it and were off to Hawaii.

Our first morning in Honolulu we wasted no time and had an 8 am practice followed by a conditioning workout along Waikiki beach. Vancouver is no slouch but that place is astonishing. I’ve never seen water that shade of blue before. The copious girls in bikini’s was also…no slouch.

Over the course of the trip we played three games. Two semi-pro teams and Hawaii Pacific University. The first game everyone played pretty brutal with the exception of O.B. (O’brian Wallace). He was soaking wet. OB has the ability to score in bunches with the best of them.

I can’t think of any other way to describe witnessing a man single handily assassinate another man’s ankles (and dignity), followed by a step-back double-pump jumper right in his face and the school girl laughter and joy it evokes in me other than to call it a ‘treat’. That’s why I call O.B. just that, ‘treat’.

This brings me to something I wanted to say about my team. The media and people on message boards are going to say what they are going to say about individual players and this and that. And don’t get me wrong, I know I speak for Brylle as well as myself that we feel honored to be ranked in the NPH top 50… but there are 5-6 guys on the team who could just as easily be on that list and it is because of them that we get this type of recognition.

In a day and age where the individual is glorified over the team and where people talk more about how many points a player averages before how many wins his team has, I feel the need to recognize and commend my teammates. You’re unselfishness does not go unnoticed and it is refreshing to see the game played the right way. You get what you work for, not what you deserve..and I see you working.

Anyways, back to hoops. We ended up winning the game and it would be the last game I played on the trip as I pulled my hamstring nicely. You know it is getting close to time to hang ‘em up when you are getting old-man injuries like pulled hammys. Very Jermaine O’neal-esque (s/o to @Gpippus). Next we play Hawaii Pacific with seven bodies. We lost the game and honestly the guys looked gassed. This was not a game I will keep in the memory banks.

The practice following this let down can be summed up by one thing:  Animal drill.

For those of you who don’t know, Animal drill has no rules, no fouls. Just you, the hoop, the ball, a couple of teammates in goon-mode…and a bunch of stone cold stunners. The purpose is to teach toughness. Message received. The boys came out and played much better in our last game against a semi-pro team with various professionals on it. A cool note about the game is we actually played in a very Hoosier-like gym on the naval base at Pearl Harbor. I’ll attach pictures below.

That brings us to the here and now. We play Manitoba and Winnipeg this weekend out at their place and from what I have seen they both look dangerous. Both teams play a similar style and are very dynamic offensively. We have our work cut out for us and I’m looking forward to getting after it again, it’s been too long.

Thanks again for reading,