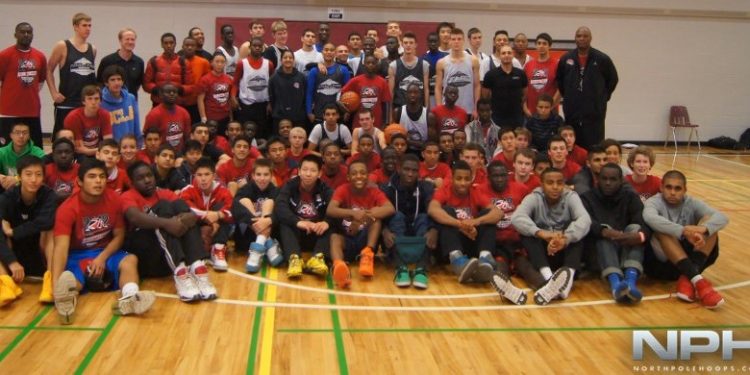 CALGARY,AB–On our second trip to Calgary, Alberta for the Full Court Press Northern Exposure Camp, the NPH Team had an opportunity to identify new prospects while tracking the progress of some that were discovered last year.

Adonios Montfort-Palomino had the biggest impact at camp, but was certainly not the only one. AMP is a complete point guard that displayed the ability to perform on both ends of the floor with consistency. There is a good chance that he will make the move to Ontario and reclassify to 2015 next season, but that remains to be seen.

Taner Parrington – Displayed a nice touch around the rim, and more importantly showed patience in the interior when operating a post move. Must improve mobility, stamina and increase explosiveness to take his game to new heights.

Otas Iyekekpolor  – Has one of the highest ceilings at the event due to his size and length. The question is; will Otas maximize his potential? He certainly played his best game that we’ve seen from him on the final day. He is very raw but is showing signs of development. He must remain patient in the post, and pick his spots on the perimeter as he does have a decent jumper.

Jamie Derochie – A joy to watch due to his never ending motor that seems to keep him multiple steps ahead of the defense. However, his enthusiasm can sometimes also lead to turnovers. Derochie must learn to control his ball speed and tempo, understanding when to run and gun, and when to play the half court game.

Tony Wolter – Can hit the three and score in transition. Would like to see more leadership from Wolter, as well as creating for others.

Sheldon Pittman– Good size for position, can hit from mid-range and deep, but must add strength, improve handle and become more assertive on the floor.

Awak Piom – Here is an exciting prospect that we’ve had the pleasure of tracking for the past two years. Piom has Length, athleticism and is extremely aggressive on penetration. He showed some perimeter ability hitting jumpers but must improve this area as well as tightening up his handle. Only a sophomore, Piom looks like he’s still growing but must continue developing, as he has the potential to continue climbing the rankings.

Derian Valdes – It was our first look at Valdes and he was as good as advertised. He possesses a pure shooting stroke and has great range. He has the ability to launch off a curl, the catch or pull up off the cradle. Valdes showed glimpses of the ability to create plays for teammates, however his challenge now is transforming into a pure point guard, which will boost his stock in a big way.

Ogot Ogot – Identical first and last name, as well as an identical brother, Mina, who also participated in the showcase. Ogot dominated within his age group, using his size to body opponents and pick up second chances. His aggression was a quality that stood out, as he is aware of his size advantage he attacked the rim with force and showed signs of a mid range jumper. It’s too early to tell which position Ogot will end up at, but one thing is for sure tightening his handle will help his game regardless of position.

Matt Fullerton – Great physique, elite ball handling. Fullerton lacks size and therefore must increase pick his spots, improve his jumper & body control. At times he may over dribble, or get too flashy, but he is still very young and certainly a prospect to look out for as he continues to grow.