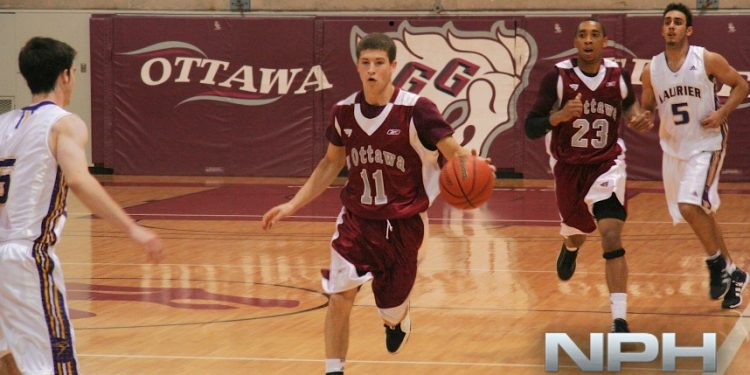 Mike L’Africain, coming off stellar freshman season, will be a big piece for Ottawa

With Warren Ward returning to the lineup within the next two to three weeks, the Gee Gees are looking forward to a promising 2012-13 season.

Ward will rejoin many of the same teammates that formed a strong core around him but led Ottawa to the OUA East Semi Finals without him.

As Canada’s second-leading scorer during the 2011 Summer Universiade Games in China, Ward had a stellar 2011, but once the calendar rolled over to 2012 he suffered an injury he’s still recovering from.

“Warren tore his ACL in January of last year in the first game after Christmas at Laurentian,” remembers head coach James Derouin, once a member of the Gee Gees basketball team himself.

“He missed the entire second semester. He had surgery in early March and he’s been scrimmaging and practicing with us and he’s very close but we won’t bring him back this weekend it’s just a little bit too early.”

The return of Ward and how quickly he can get up to speed will likely be the determining factor for how the season goes. Early signs indicate Ward is raring to go

“What people are going to see in Warren when he gets back is, in scrimmages he has looked even better than he did before his injury, he looks absolutely dominant, so we’re excited about that,” said Derouin.

“He’s a top five player in the country and I don’t think anybody would question that. When we get him back into the mix we feel like we could play with pretty much anyone.”

When Ward returns he’ll play alongside some players who benefited from the increase in playing time last season, forced to step up sooner than expected after the unfortunate injury.

Mike L’Africain, a 6-1 guard from Oakville, and Vikas Gill, a 6-7 forward from Stitsville, were both named to the OUA East All-Rookie team at the end of the 2011-12 campaign. L’Africain also won East rookie of the year, and was named to the national rookie team as one of the top five rookies in the CIS.

“Those two did well and they look ready to pick up where they finished off,” said Derouin of Gill and L’Africain (or Mike and Vik as he calls them)

“Mike especially has looked extremely strong in the games so far, he averaged 19.5 points per game in the UNLV and Northeastern and another 19 against Loyalist so he looks ready to make that sophomore jump.”

Joining the young Ottawa team are recruits Moe Ismail and Caleb Agada, a pair of 6-4 scoring guards from the Hamilton area, Matt Nelson and Ryan Evans, a pair of 6-10 centres that will shore up the frontcourt, and Matt Plunkett, a 6-6 shooter from Barrie, and a top-10 power forward in his class.

The rookies have already been making their mark.

Agada was named uOttawa male athlete of the week after he collected 12 rebounds including seven on the offensive end, and shot 4-7 from long range on his way to a team-high 25 points in a 114-57 exhibition victory over Loyalist College.

He and Ismail are expected to take over the reigns of the team eventually, as Warren Ward plays out his final year of eligibility.

“They’re all looking good, we’re excited about our young guys for sure,” said Derouin.

Key pieces Johnny Berhanemeskel, who was named a first-team all star in the OUA East last season, and 6-6 post Gabriel Gonthier-Dubue, will join Ward, L’Africain, Gill and the new recruits to form what is likely to be one of the top teams in the division as they prepare to start the season November 9 against Western.

“Our expectations are high,” said Derouin.

“We felt like we got our real chances taken away from us last year when Warren blew his ACL. We still managed to compete and do very well, but we came up short against Ryerson [74-71] in the playoffs, but we feel like by re-adding Ward and having Mike and Johnny and Vik and Gab with Warren and what is maybe one of the stronger recruiting classes, our expectations are high.”