Algoma men’s basketball coach Etienne Jacquet believes his 2020 recruiting class can be the foundation for the future improvement of his program. Finding sustained success at any level takes time and he knows that but, with the traits of this incoming group, there’s reason for excitement in Sault Ste. Marie.

After getting the job last summer, Jacquet had little time to build a recruiting class. This season was a different story though, and the former Thetford Academy coach is pleased with the talent he was able to sign.

“I mean basically I had what 10 days to recruit when I got the job so it’s a process,” said Jacquet about last summer. “It’s the first step, getting some bigger guys in, getting some guys that can start getting ready to play at the U SPORTS level.”

Algoma has struggled to find its footing in the OUA since stepping up a level from the college ranks for the 2013-14 season. Following last season, Thomas Cory, who led the school through its transition, was ready for a new challenge and headed to Nipissing to lead the Lakers men’s basketball program after a 12 year run with Algoma.

With Cory moving on, that left a job that Jacquet stepped into. The new coach knew that he needed to build a class that could better compete with the U SPORTS powerhouses in their conference.

Since entering the OUA, the Thunderbirds had run into a common issue for many teams that move up a level: size. Jacquet made it clear with this class though, size won’t be an issue any longer.

With five of the new recruits standing 6’5 or taller, the added size will be much needed for a team that finished last in the conference in rebounding last season.

If there’s something unique about Algoma, it has to be the school’s population. Being the smallest institution in your league by a significant margin can create some challenges but Jacquet doesn’t look at the school’s size as a negative. For him and his staff, they believe it gives them an opportunity the larger schools don’t have.

“It’s almost a family thing so we’re going to help you anyway we can in order for you to get your diploma or degree,” said Jacquet. “I tell the kids, listen you can go to a big school and be a number or you can come to a school that’s a little bit smaller and everybody knows your name, knows your goals and they want to help you achieve those goals.”

Considering over half of the class are literally family, it’s hard to not take Jacquet for his word. Brothers Satchel and Sterling Benjamin and Omer and Jabril Jama give this class a feeling of family unlike any other in the country. 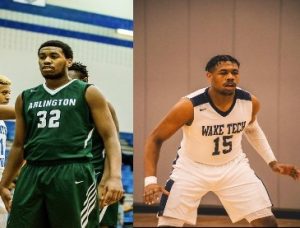 “We’re trying to have a family atmosphere so if I don’t have any brothers then I’m lying,” Jacquet joked.

For a small school without much of a reputation in U Sports basketball, the diverse regions the incoming class is from has to catch your eye. Players from Texas, Alberta and Saskatchewan are all heading to Sault Ste. Marie, and it’s something Jacquet says those with a vested interest in Canadian recruiting should expect going forward.

“It’s the ability to find players that fit what we want to do,” said Jacquet. “Guys that want to work, guys that want to get their diplomas. Wherever we can find them we will find them. I’m going to be a guy that’s looking at national and international for guys so you should expect that from Algoma now on.”

There’s no denying last season was a difficult one for the Thunderbirds. With multiple players coming with college and prep level experience as well as a breadth of size and versatility, it appears Algoma may have the building blocks to turn the corner in the OUA.

The coach’s scouting report: “A big guy, he’s really going to take care of the inside for us. Very athletic, I think he has (we measured it) a seven-foot wingspan, so he’s definitely going to be blocking shots. Being in there, being in the trenches. He’s going to be a big boy down there for us that’s going to help us out there.”

The coach’s scouting report: “Roman I feel like with some good development is going to be adding some scoring. Definitely the man can shoot the ball, I believe he can definitely shoot the three, looking to extend it to the NBA range as well. Also good at marking so that he can start leading us in terms of running our sets and getting our stuff going so playing the point guard and shooting guard position. So, he’s going to be one of those guys that he’s going to be learning the point guard position but while he’s doing that, he’s definitely going to be able to help us with his shooting and his scoring. I feel like it’s natural for him to put the ball in the basket.”

The coach’s scouting report: “Bigus is going to bring a passion for the game, intensity on the defensive end and contribute on offense. Bigus believes in getting better on and off the court and is excited for the opportunity to play with the Thunderbirds. With his level of athleticism and basketball IQ, he will be able to contribute right away. Bigus will add to the depth of our team and will help us achieve versatility on the court.”