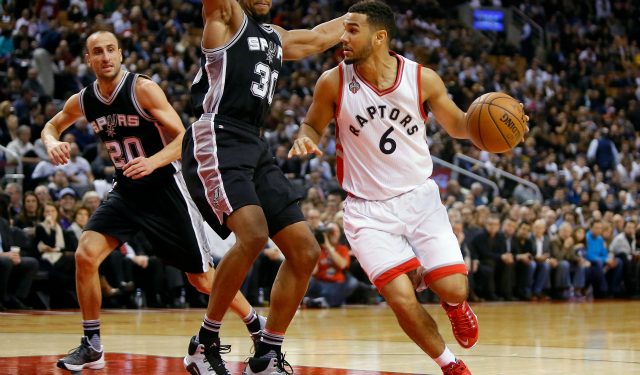 The son of an immigrant, mild mannered, but with a steely resolve. A nice guy and an honest worker. He fell in love with basketball instead of hockey, but as the national U-19 men’s team showed on Sunday, that’s the Canadian way too now.

From Pickering High School to the pros, Cory Joseph has made a career out of winning. There were the back-to-back provincial championships with Pickering, the national high school championships with Findlay Prep alongside close friend Tristan Thompson, before the big one sooner than he could have ever imagined, the Larry O’Brien trophy in his rookie season.

Joseph may not have been a key figure in San Antonio’s march to the NBA title, but the Spurs way isn’t just about what’s tangible. They provide an ethereal experience for anyone deemed worthy. Role players usually go there and flourish, but depart and they perish. The Spurs are a model employer, emphasizing team success and moral fibre over individual accolades and superstar treatment. It’s the fabric of their core, and it’s their search for compatibility that led them to the then 19-year old Texas Longhorn.

“He’s (Joseph) always been that way, you don’t make somebody that way,” Spurs head coach Gregg Popovich was once quoted as saying.

The Pickering native put in time with Spurs NBA G-League affiliate Austin Spurs at his own request to further the development of his game, before returning to the senior club and becoming an integral part of their rotation as a backup to Tony Parker.

Joseph had clearly won the organization over, but the opportunity to sign LaMarcus Aldridge meant that they needed to renounce their rights to him, which was when Toronto swooped in.

The Raptors hadn’t won a playoff series since 2001, and after consecutive first-round exits, were in need of players that brought a winning mentality and knew how to get it done. Lou Williams won the ‘Sixth man of the Year’ award, but did it his way and not what many would consider a team way. Greivis Vasquez was flashy and had a shimmy, but didn’t always play defence like it mattered any.

So, who better to turn to then than a local boy with a championship ring to his name?

After wearing #5 throughout his career, he changed it up and repped the 6ix wearing not just the number, but the pride of those boroughs he now represented at home.

He immediately provided the Steady Eddie effect Dwane Casey was looking for, and showed his winning pedigree with a game-winner at the buzzer on the road against Washington, the team that had swept them the year before.

As Kyle Lowry struggled through the 2016 postseason, it was Joseph who provided a calming influence, looking like the best backup point guard in the league not named Shaun Livingston. The Raptors advanced past the first round for the first time since 2001, and then sneaked past Miami in the second round too.

An Eastern Conference Finals debut beckoned, where they would be presented with the daunting task of dethroning LeBron James and the Cleveland Cavaliers. The Raptors were written off after getting dismantled at the Quicken Loans Arena, but they knew they were coming back to the friendly confines of the Air Canada Centre.

They found their feet at home, and Joseph’s defence on Kyrie Irving in Game 3 was one of the most underrated aspects of the win. Irving shot 3-for-19, and even his meanest Uncle Drew move couldn’t shake Joseph’s determined game face. The Raptors rode that momentum to win Game 4 too, before the Cavaliers found another gear to close out the series.

Joseph showed his propensity to come through when his team needs him most this past season as well. After struggling for the first half of the season, there were growing concerns that Joseph’s lack of three-point shooting and lateral quicks were catching up with him. But after Kyle Lowry was ruled out with a wrist injury, Joseph steered them forward, starting at point guard and guiding the team to a 14-7 record in the absence of their best player.

When the Raptors played the Bucks in Game 6 of the first round this year, it was the former Spur who Dwane Casey turned to in the final minutes of the fourth after Toronto blew a 25-point lead with five minutes remaining in the third quarter.

Trailing 80-82 with 2:12 remaining, Joseph played the perfect give-and-go with Patterson, who finished with a slam to tie the game. Then, with 1:30 remaining, the game tied, and the shot clock winding down, the Raptors swung the ball around the perimeter to the open man in the corner, Joseph.

The Raptors won the game, and the series in six, but who’s to say  what might’ve happened if Casey hadn’t turned to his winner from the 6ix. That’s just a “what if” now, and the reality is that Joseph will begin a new chapter as an Indiana Pacer soon. A chapter that will present an individual challenge for a change, that of becoming a starting point guard in the NBA. He made his first playoff start for Toronto this past postseason against Cleveland, and had 20 points, 12 assists, and six rebounds in his second. Those opportunities will only aid his claim for the spot in Indiana.

The little things he provided over his tenure with the Raptors aren’t always tracked on the box score or make for the fondest of memories, but like the slow and steady turtle, it usually won the race. In crossing those finish lines, his imprint on Canadian basketball goes much deeper than wearing Canada’s lone NBA team’s jersey, just ask RJ Barrett or Abu Kigab.

DeRozan may have needed to sign a five-year $139 million-dollar deal to pledge his allegiance to the city, but it’s Joseph who—Raptor or not—will remain Toronto’s very own.