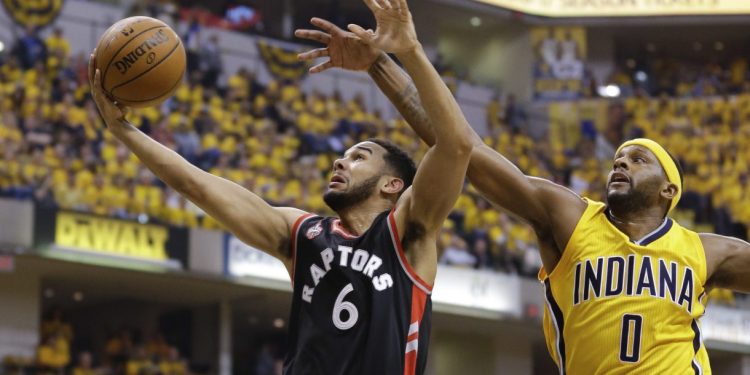 The Toronto Raptors have agreed to a sign-and-trade with the Indiana Pacers to acquire C.J. Miles for Cory Joseph.

ESPN Insider, Adrian Wojnarowski is reporting that Miles will sign a three-year deal worth $25 million and will include a player option on the third year.

Toronto reportedly agreed to a trade on Sunday with the Brooklyn Nets that will see the Raptors dump DeMarre Carroll‘s large salary. The Raps would also give up a first and second round draft pick to the Nets in exchange for Justin Hamilton.

The deal with the Nets must be completed in order for the Miles trade to go through.

The Raptors will be $550,000 under the salary cap when both trades go through.

Being under the cap isn’t the only reason for the trade. Miles is a versatile wing that will provide consistent three point shooting and defence to the Raptors. Miles shot 41% on three pointers last season. Expect him help in the development of Norman Powell while sharing minutes.

Joseph has been a reliable backup to Kyle Lowry in his two seasons with the Raptors, but the rise of Delon Wright and Joseph’s high contract made him dispensable.

Joseph, 25, will look to win the starting point guard role in Indiana after they recently signed Darren Collison.

The Toronto, ON native joined his hometown Raptors in 2015 after spending four seasons with the San Antonio Spurs and won the NBA Championship in 2014. Joseph averaged 9.3 points and 3.3 assists in 80 games last season.