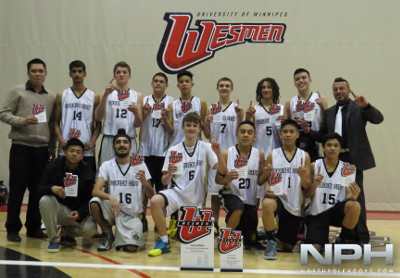 The Junior Varsity Wesmen Classic Tournament is no walk in the park.

To win the trophy, you need four victories, against equally difficult teams, which includes three games in two days, followed by a two week break, and another top opponent. To sum it up, it is an emotional rollercoaster that requires you to bring your best every game.

Garden City beat a tough Dakota team in the opening round, then faced a guard-oriented team in Sisler that went down to the last shot. Following Sisler, GC had a tough semi-final against a well-balance John Taylor team.

Finally, the last stop was against Maples, a well-oiled machine that put up an average of 98 points per game in their three previous contests.

These two teams played one heck of a game in front of a packed Duckworth Centre.

Garden City ran into foul trouble early, with two of their starters picking up two quick fouls, however that didn’t stop Marcel Arruda-Welch.  Once he got back into the game, he had a huge impact, forcing turnovers and making shots.

However, things started to slowly fall apart for Maples in the second half as their Star player Eric Braganza picked up his fourth foul and was forced to sit on the bench, while starting PG Miles Lisan went down with an injury that took him out of the game for a good portion of the game.

“We couldn’t make a layup or put back for some reason. We could have really had control of the game; we could have been up by 10, especially when Eric (Braganza) was in foul trouble. We had a good run, our defence was creating some transition points for us but we were just missing layups.”

Despite the inability to finish, Garden City’s Trezon Morcilla was able to step up. One three after another allowed Garden City to take a three point lead into the final quarter. Eric Braganza went coast to coast and gave Maples the lead. Garden City took it back with Arruda-Welch scoring. Braganza made it a one possession game with two clutch free throws.

Then with the game tied, and 16 seconds left Garden City inbounded the ball, Arruda-Welch drove hard, put it up off the glass, giving the Fighting Gophers a 70-68 lead and the game winner.

After the game, Arruda-Welch spoke about the ending.

“Trezon set a nice screen, I dribbled right, threw it and tried to go for the corner and got it in. It feels great to win, a lot of hard work and practicing and it feels good to win.”

‘I asked my coach for the ball,” Arruda-Welch continued.

Coach Grinevsky expressed his feelings on the positive outcome.

“I’m very proud of my kids, my kids got a lot of grit and they are very determined. This team (Maples) is very gritty, they don’t give up and we didn’t show our best game but my kids got heart and determination.”

Trezon Morcilla was the team’s leading scorer and named  MVP for the tournament for his production.

“It’s surreal, it feels amazing but, honestly Marcel did an amazing job. It was a team game; we can’t just base it off of one player. As I said, Marcel did a good job and stepped up when we needed him,” Morcilla told NPH.

When asked if this victory puts a bull’s-eye on their back in the city, head coach Grinevsky said “No, we still got a lot of work, our job is not done.”

With this victory, Garden City has now won the last three of five JV Wesmen Classic Championships, an impressive feat for the basketball school that continues to produce.

The opening round of the HS Varsity draw had all eight teams in action. The first game of the day happened to be the closest as MBCI escaped with an opening round victory over John Taylor in a close game until the Hawks pulled away winning 82-73. Derek McKnight and Torrez McKoy were key in the victory for MBCI, and John Taylor’s Marcus Morgan scored 27 in the loss.

The second game had U of W Collegiate taking on the mighty Oak Park Raiders. Oak Park easily took the game 104-46, as five Raiders registered points in double figures, including William Sesay’s 15 point, 16 rebound performance. Kelvin started slow offensively but picked it up in the second and fourth quarter defeating the Sturgeon Heights Huskies 70-46 and advancing to the semi-final round. Ivan Paskvalin added 28 points quietly in the win. Garden City started their quest for a fourth straight title with an opening round 85-42 victory over the Maples Marauders.