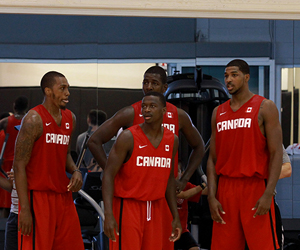 TORONTO,ON–Jamaica will take on Canada in Toronto at the Mattamy Athletic Centre August 8 & 10. The Senior National team has yet to make cuts from their training camp list, however will do so on game day.

Jamaica’s roster has been released, which features a Canadian of their own in Dylan Ennis (Brampton, Ontario) entering his sophomore season this fall after sitting out last year due to transfer rules (Rice).

Jamaica will be Canada’s first opponent of the summer in preparation for the FIBA World Qualifiers in Venezuela.

NPH caught up with Team Canada at training camp

Tickets to the two games are still available and can be purchased through ticketmaster.ca.

Please note: the 12-man rosters for each game will be decided on game-day