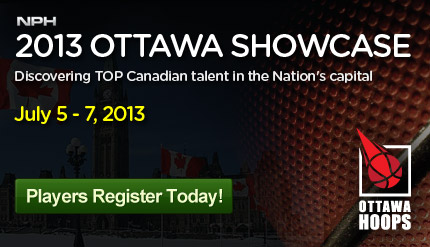 The NPH Ottawa showcase taking place July 5-7 at Carleton University, is right around the corner! The following info will provide a look at the full event schedule and expected prospects to be in attendance.

Registration will begin at 5PM on Friday, July 5, followed by introductions and goals of the NPH showcase.

Merrick Palmer will open day one with dynamic warm ups and stretching, to prepare athletes for a competitive and educational weekend. Palmer, a CIS National Champion (St. FX), is currently the Technical Director for the Ottawa Skyhawks (NBLC) and is the owner of Capital Courts training center.

The NPH Ottawa showcase is designed to bring the basketball community in the nation’s capital TOGETHER– to communicate, learn and ultimately continue aiding in growth of the game.

This will be a great opportunity for young prospects seeking national exposure, player development and an unforgettable experience, that will aid in growth as a player and person.

The prospect list list will be updated throughout the week, as more players confirm their spots within the next few days.

Chris Egi is a BEAST! Dunking All ...

Without Wiggins, Junior Nats Takes on the ...