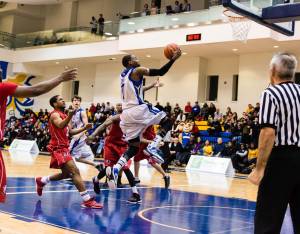 Playoff season is under away in the OUA, and with four games on the schedule it provided us with some exciting action. If the first round is any indication, the road to the Wilson Cup will be a memorable one. Carleton, Ottawa, Windsor and Lakehead all earned first round byes, they found out who their opponents would be after Wednesday night.

The Badgers were faced with the tough task of heading on the road and grabbing a playoff win. They also needed to find a way to neutralize the CIS leading scorer in Max Allin (ranked 17 in the NPH top 50), and by the way the Golden Hawks were winners of four of their last five games. The one Laurier loss over that five game span however came at the hands of the Brock Badgers.

So there was reason to believe the Badgers could pull off the win Wednesday night. Brock came from behind on the road to claim an 81-75 win in round one of the playoffs. Mark Gibson’s 20 points and 7 rebounds led the way for the Badgers, but it was Brock’s 36 bench points that pushed them into the second round. Jameson Tipping (ranked 30 in the NPH top 50) had 14 of those 36 bench points, and went 5 of 6 from the free-throw line late in the game to seal the victory.

Max Allin (ranked 17 in the NPH top 50) had a game-high 23 points and added 8 rebounds and 5 assists for the Golden hawks in the lost.

Brock will now pack their bags and head to Windsor to take on the sixth ranked Windsor Lancers on February 23 in the OUA West Semi-final.

York gave Ryerson all they wanted in their first round matchup, but a strong third quarter by the Rams was enough to send Ryerson through to take on the Ottawa Gee-Gees in the OUA East semi-final.

Aaron Rados took his game to another level in this one going 5 for 8 from three-point land, finishing the game with 20 points and 7 rebounds. Fifth-year senior David Tyndale (ranked 38 in the NPH top 50)  finished his CIS career with 17 points and 5 assists.

A huge amount of York supporters made the trip to the Mattamy Athletic Centre to cheer on the Lions. They gave Tyndale a standing ovation when he exited the court for the last time wearing the red and white.

The young Gaels squad started off Wednesday night’s game slowly finishing the first quarter down nine points, and were down 14 heading into the halftime break. Although Queen’s played much better in the second half they were never able to overcome the slow start.

All five Laurentian starters eclipsed double digit scoring led by Manny Pasquale (ranked 19 in the NPH top 50) who had the stat line of the night finishing with a game-high 33 points, 5 rebounds and 6 assists.

Greg Faulkner (ranked 33 in the NPH top 50) and Sukhpreet Singh combined for 48 of the Gaels 80 points, but Queen’s didn’t get much help beyond those two.

Laurentian now heads on the road to take on Lakehead in the second round.