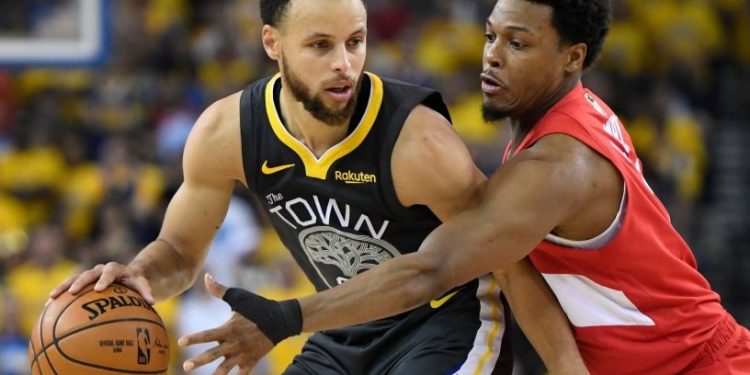 The Toronto Raptors surprised everyone when they dismantled the Golden State Warriors in Game 3 to take a 2-1 series lead. They are playing their best basketball of the year while the Warriors have struggled with injuries and have stumbled their way through this series so far. However, tonight the roster rotation wheel spun favourably for Coach Steve Kerr as he welcomed the return of two key pieces; Klay Thompson and Kevon Looney. Klay has been chomping at the bit to get back on the court while Looney’s return is much more surprising, many had him written off for the rest of the series with a broken collarbone. The other big storyline that came out of Game 3 had nothing to do with the drama on the court but instead the drama off it. After diving into the crowd for a loose ball, Kyle Lowry was pushed by Warriors minority owner Mark Stevens for no apparent reason. Toronto’s mercurial leader showed excellent composure at a tense time by handling the situation the right way while still standing up for himself. Kyle received overwhelming support from the league and his peers as he was thrusted into the spotlight of the “player rights/player protection” conversation. The Raptors did not let this distract them, they instead used it to galvanize their charges and reinforce their ‘Toronto vs Everyone’ mantra. The Warriors were expectedly motivated to start the game, the crowd was deafening, and aside from Kawhi and Serge, the Raptors struggled to find any offensive rhythm. In the second half, both teams traded blows until Leonard caught fire to power the Raptors to a double-digit lead. From there, Toronto showed championship poise to manufacture good looks and force the Warriors into difficult shots. They got timely buckets down the stretch and, although Klay and Steph were hot, they kept Golden State from ever getting within striking distance. In a truly professional effort, Toronto took care of business and landed a devastating blow with this massive road win. The Raptors now have a strangle hold of the series and are one win away from an NBA championship.

Kyle Lowry has unlocked another level to his game, his stats may not show it but, he was the engine to Toronto’s offense and a key cog in their defensive sets. He once again struggled with his shot, but he was a maestro in the half court where he made plays and set up teammates for easy looks. He helped the Raptors take control of the game by surgically dissecting the Warriors defense with his probing dribble and shrewd passing. Lowry was the heart and soul of this team, his sheer willpower elevated those around him. KLOE had 10 points, 2 rebounds, 7 assists and 3 steals. Kyle earned high praise for his performance tonight, he has evolved to an elite player and he deserves every accolade. 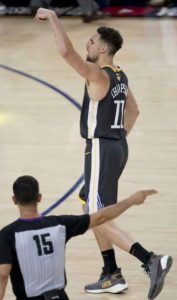 Klay Thompson was itching to get into Game 3. His pained expression was painted all over his face, not because of his injury but because of his inability to help his squad quell Toronto’s onslaught. Tonight, Thompson made his return to the lineup and immediately gave the Warriors an injection of energy and deadeye shooting. Klay was automatic, he has one of the purest shots in the league, when he scores the ball barely touches the rim. His offense was essential for the Warriors to keep pace with Toronto but aside from his shooting, Klay could not do much else as his leg injury hampered his mobility. Despite his hamstring he logged 42 minutes and finished with 28 points (6 for 10 from deep), 3 rebounds, and 2 assists. It’s incredible that he was able to make such an impact playing on one leg. 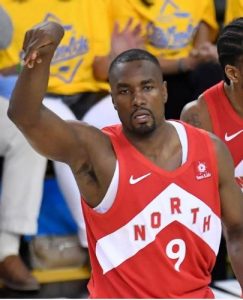 Serge Ibaka came alive at the end of Game 3 and carried over his confident play into tonight’s action. When the Raptors struggled to produce points early, Serge stepped in and knocked down a couple of jumpers including a sweet crossover pull up on Demarcus Cousins. In the second half, Ibaka continued his hot play with a block on one end and a big three at the other. He worked the high pick and roll with his point guards to perfection and nailed his jumper with confidence. Ma Fuzzy Chef was cooking to the tune of 20 points, 4 rebounds, an assist and two angry blocks. Ibaka gave the Raptors a huge boost tonight in a hallmark performance.

Fred VanVleet has been a marvel as Toronto’s primary option on Steph Curry. Though Curry still fills up the scoreboard, VanVleet has made him work for every point. VanVleet took a hard elbow to the face which knocked out a tooth and sent him to the floor. It was a scary moment as he laid motionless on the court with blood seeping from an open wound under his eye. But he returned to the bench 7 stitches later looking like a prizefighter in the last rounds of a heavyweight bout. Fred had a modest scoring night but did a good job ensuring his teammates stayed involved. VanVleet finished with 8 points, 4 rebounds, and 6 assists. He picked up the Unsung Hero credit based off his toughness, defense and resiliency alone. 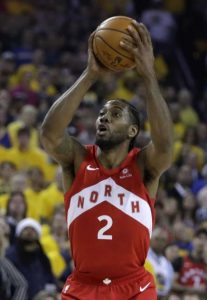 Kawhi Leonard had another magnificent night to anchor the Raptors. He single-handedly kept Toronto close in the first half with his scoring as every other player, aside from Ibaka, struggled to make shots. Toronto’s resident superhero picked up his intensity late in the third quarter where, in a masterful display of offensive efficiency, he went off for 17 points. The Klaw was incredible in the midrange, he used his solid frame to generate space and stay balanced on his release. Leonard also hit the glass hard to help limit Golden States second chance opportunities. He had 36 points (including 5/9 from deep), 12 rebounds, 2 assists, 4 steals and a block. Kawhi was an artist with the basketball and tonight was another masterpiece.

The series now shifts back to Toronto where the Raptors will have a chance to make history at home on Monday night.