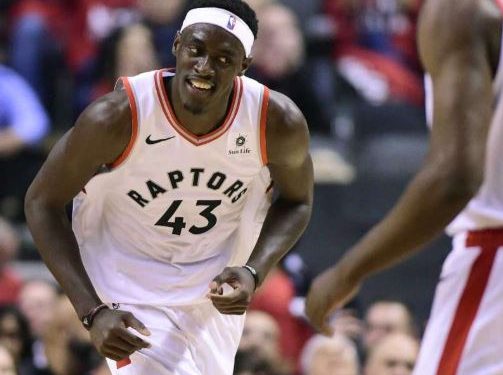 The Toronto Raptors welcomed the Orlando Magic to the Scotiabank Arena for Game 5 of their first round series on Tuesday night. Orlando was brimming with enthusiasm after their Game 1 win, but they have been outworked, out hustled and out classed in every game since. Now they look down trodden and no longer have that youthful confidence that they carried after their early victory. Despite their trepidations, the Magic had to go all in tonight in a desperate attempt to save their season. Coach Nurse and his pack of Raptors smelled blood in the water and quickly sunk their teeth into the hapless Magic. Toronto learned their lessons from Game 1 and ratcheted up their defensive effort. Their renewed commitment to protecting the rim has turned this team from good to elite. Toronto attacked Orlando with unyielding ferocity, forcing their big guns into early foul trouble and blowing up any game plan Coach Clifford had drawn up. Orlando tried to fight back but this game was decided in the first 5 minutes after Kyle Lowry went Super Saiyan. The Raptors were surgical, they eviscerated the Magic with such disciplined precision that it was almost intoxicating. The writing was on the wall, and the reality of Orlando’s looming elimination grew with each passing minute. Toronto completely dominated in the win and sent a message to the rest of the conference that this team is for real. This is the best version of the Raptors that we have ever seen. Toronto wins the series 4-1. Bring on the 6ixers. 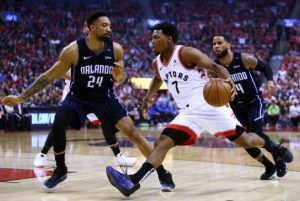 Kyle Lowry carried a winner’s mentality from opening tip and exploded to start the game. He singlehandedly ignited one of the most dominant stretches in recent Raptors memory. Before the pre-game firework smoke had cleared, Lowry had already pushed his team to a 15-point lead. That opening stretch defined the game, it gave the Magic an insurmountable deficit to overcome and Toronto never looked back. KLOE was omnipresent. He was decisive, he moved the ball well and played excellent defence, including standing in for a number of charges. Lowry scored 14 points, grabbed 4 rebounds, came away with a steal and handed out 9 assists. Kyle had his fingerprints all over the game and proved that he is still the engine that powers this team. 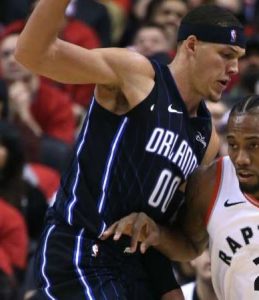 Despite a quiet game, I want to give the series credit to Aaron Gordon. In a night where everyone struggled, Gordon scored 11 points, pulled down 7 rebounds with an assist and a steal. If the Magic were unsure about what to do with Gordon, I think that this series proves that he is a talent worth including in their future. Of all the Magic players, Gordon was the one constant that put in a solid effort on both sides of the ball in every game. He still has a lot of work to do, but Gordon showed excellent maturity and looks poised to learn from these lessons and take the next step. He was easily Orlando’s best player and I applaud his effort in a losing cause.

Pascal Siakam is a human cheat code. Spicy P had another extraordinary night to add to his already impressive playoff resume. He has been making believers out of NBA pundits everywhere and he is earning more and more supporters with each passing game. Playing alongside high IQ players has allowed Pascal to flourish. His development has been on a mountainous rise and Toronto is finally reaping the benefits as it reaches its crescendo. The Magic had no answer for Siakam tonight, he finished with 24 points on 8/16 from the field, 6 rebounds, 4 assists and a block. Players beware, Pascal Siakam has arrived.

Playoff Norm made an appearance with another strong performance. He has found his role with this team and has figured out how to maximize his efficiency when he is on the floor. His game was highlighted by a couple of strong drives leading to thunderous detonations at the rim. Powell had 11 points in 18 minutes to go with 4 rebounds 2 assists and a steal.

Shout outs to Fred VanVleet who shook off his own monkey to play a strong night. Freddy is still working to get back to form, but he had his best game of the series finishing with 7 points and a team high 10 assists. 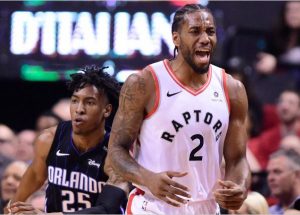 Kawhi Leonard attacked the Magic with cold, uncompromising relentlessness reminiscent of the White Walkers. He was an unstoppable force, systematically dissecting Orlando’s defenses. Kawhi Leonard did not take long to put his stamp on the game. He showed a masterclass in offensive versatility pouring in 27 points on 8/11 from the floor, 7 rebounds, 2 assists and a steal. Leonard also stretched the defense by going 5/5 from deep which, at this point, just seems unfair. He was serenaded by the crowd with chants of “MVP” as he was subbed off the floor.

The Philadelphia 76ers saw what the Raptors did and promptly took care of business themselves by dispatching of the upstart Brooklyn Nets in convincing fashion. The second round will be a highly anticipated series and should make for some compelling basketball in the weeks to come.