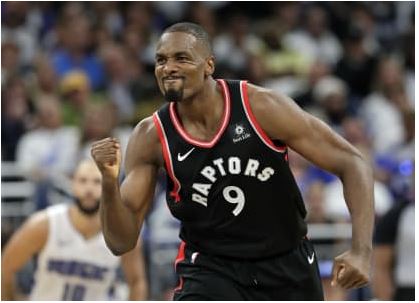 The Toronto Raptors paid a visit to the Amway Center to take on the Orlando Magic for game 3 of their first round series on Friday night. The Raptors tripped on their own feet in game 1, coughing up early control of the series but came back in game 2 to land a haymaker and re-assert their dominance. With the Magic looking to counter punch and the Raptors trying to establish momentum, the intensity and the physicality of the game was taken to another level. The Magic unleashed their band of athletes and tried to increase the tempo. The Raptors did not take the bait and instead tried to slow the pace and execute in the half court set. Neither team was successful in finding a rhythm which resulted in a chippy first half. After the break, the game slowed to a crawl as the physicality led to a caravan of whistles and stoppages in play. In a slowed game, the Raptors were able to use their experience to pick apart the Magic and dissect their defensive schemes. The Magic did all they could to take away Toronto’s heavy hitters, but it’s pick your poison when it comes to a team this deep. The added attention brought on by Kawhi Leonard, Marc Gasol and Kyle Lowry allowed Pascal Siakam to explode for a career night. Orlando clawed and fought valiantly but, with time winding down, Lowry came up with a crucial rebound off a Kawhi missed jumper to earn the Raptors the game winning possession. Toronto ripped back home court advantage with this gut punch of a win.

After tonight’s game, it is apparent that Kyle Lowry has become public enemy number 1 in the eyes of the Magic faithful. His dustups with Michael Carter Williams along with his natural prickly self has earned him the ire of the crowd and boos whenever he touched the ball. Although Siakam went off to lead the Raptors, I would argue that Kyle’s 12 points may have been more important. Forcing defenders to respect Lowry’s range and exploiting them with hard drives when they get too close is an invaluable wrinkle to the Raptors offense. Along with his points, KLOE added 5 rebounds, a steal, a block and 10 assists for the double-double. Lowry has shaken off the lingering effects of game 1 to return to the player we have come to expect; both instigator and orchestrator. 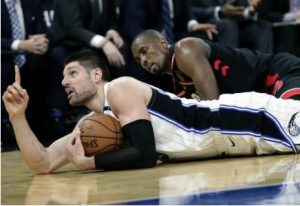 Nikola Vucevic has been quiet in the first two games, but he was able to go off when Marc Gasol fell victim to an unforgiving whistle. Without Big Spain to contend with, Vucevic was finally able to make his impact on the series. He used his massive frame to outmuscle Toronto’s undersized forwards and when the paint was clogged, he would face up and show off a surprisingly soft jumper. Nikola finished the night with 22 points, 14 rebounds, 6 assists, 1 steal and 3 blocks. Seeing Vooch Island again was a welcomed sign for the Magic. 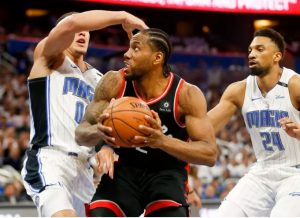 Kawhi Leonard had to dig deep to grit his way through a tough game. Leonard struggled from the field and, despite repeatedly attacking the rim, he did not make his first trip to the foul line until late in the first half. There were reports that Kawhi has been under the weather and did not practice with the Raptors over these last few days. That, coupled with the Magic doing all they could to make life difficult, forced Kawhi into a rough night. He was still able to make some key plays down the stretch, he opened space by pulling second defenders and did some dirty work on the glass to make up for his lack of buckets. Kawhi was uncommonly inefficient, only going 5/19 from the floor, but still came away with 16 points, 10 rebounds, 4 assists and a steal. This game was an example of finding ways to contribute when shots aren’t falling.

Marc Gasol once again held a defensive clinic against the Magic frontcourt with a showcase of quick hands and shrewd footwork. For the second game in a row, the Big Orca came away with 4 steals. The Magic only found success in the paint when Gasol was on the bench as he stunted their attacks whenever he was on the floor. Marc scored 9 points to go with 3 rebounds and an assist. Gasol found himself on the short end of the stick on several calls which may have limited his effectiveness but make no mistake, Big Spain has been paramount in fortifying Toronto’s defensive effort. 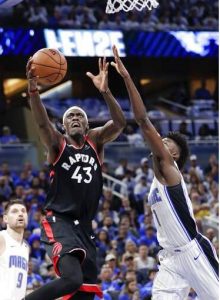 Orlando put pressure on Siakam, crowding his space and forcing him to reach deeper into his bag of tricks to get his game going. Pascal showed impressive maturity, taking advantage of whatever the defense gave him. Siakam had a nifty one-handed elbow jumper going as well as his trademark corner three. My favourite moment was when Pascal drilled a triple from the corner to the disappointment of everyone in that section except for Superfan Nav Bhatia who, clad in Raptors red, was the lone Raptor fan cheering in a sea of blue. Siakam was asked to carry a heavier load than normal as Kyle struggled with his shot and Kawhi was being battered in the paint. He showed excellent poise and came up huge with soft jumpers and clever cuts ever time the Raptors needed a basket. The highlight of the game was when he faked Terrence Ross out of his shorts for an And-1 finish. Siakam was fantastic tonight scoring 30 points on 13/20  from the field (3/4 from deep) to go with 11 rebounds and 4 assists. This was a statement game for Spicy P as he ended the night with playoff career highs in points and rebounds to lead Toronto in both categories.

Up 2-1, Toronto will now have an opportunity to put a stranglehold on the series with a win on Sunday night. The Magic will have their backs against the wall, and will no doubt come out swinging. It should be an exciting game.