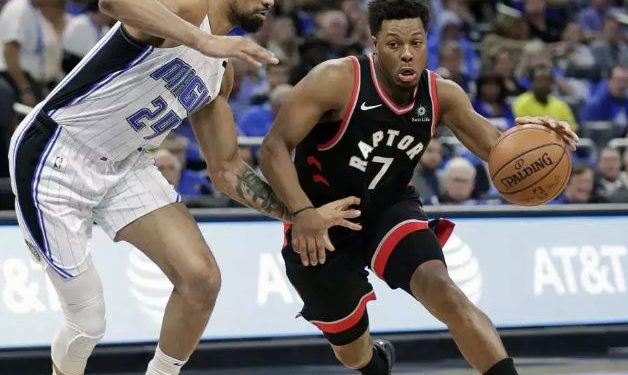 It was a quick turnaround between Game 3 and Game 4 as the Toronto Raptors and Orlando Magic locked horns again on Sunday for an evening contest. After three games, the story of the series has been Toronto’s defence and the emergence of Pascal Siakam. Toronto was looking to repeat their dominating performance on D and wake up their sleeping giant of an offence. Meanwhile, the Magic were scrambling to figure out how to break through Toronto’s stingy rim protection and stop their collection of star players. Orlando was starting to feel the pressure and certainly did not want to head back north down 3-1 for Game 5. The Amway Center was rocking, and the Magic came out swinging. Toronto absorbed Orlando’s early punch and responded with a body blow of their own to suck the wind out of Orlando’s sails. Whistle to whistle, this was a professional performance from the Raptors. Coach Nurse paced his timeouts and executed his plays predominantly through Marc Gasol at the high post or from the wings through Kyle Lowry or Kawhi Leonard. Add in a sprinkle of Spicy P and the Magic were left with their hands full. The Raptors were able to maintain a comfortable lead throughout the game, never really feeling any pressure from the pesky Magic. Whenever Orlando tried to mount a run, Toronto was able to respond with a quality look or a trip to the foul line. The Raptors held the Magic at bay like a big brother holding back his rambunctious little brother with a straight arm hand to the head. The game was punctuated with a signature moment when late in the fourth Fred VanVleet set up Pascal Siakam for a confidence killing ally oop dunk. With this win, Toronto goes up 3-1 and tightens their vice grip on the series, pushing Orlando’s back firmly against the wall.

Kyle Lowry is not the same player as he was a few years ago when the Raptors could count on him for 20 plus points a game. Those days are long gone. But where Kyle has dropped off in scoring, he has made up for it with wily poise, hustle and gritty determination. Kyle has an innate ability to come up with intangible plays; the ones you can’t prepare for, the loose balls and tip outs, the help D and hard off ball screens. These plays are often momentum shifters and the catalyst of many of Toronto’s runs. Lowry finished the night with 9 points, 4 rebounds, 4 steals, a game high 9 assists and a handful of momentum swinging plays that won’t show up on the stat sheet. KLOE was all business tonight. 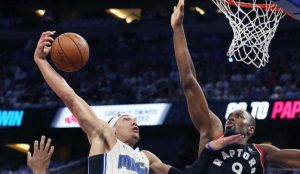 Aaron Gordon has supplanted Nikola Vucevic as Orlando’s best player. Despite having the most difficult cover in the series, Gordon has brought positive play in every game. He seems to be getting better as the series goes along, the only problem is that so has Kawhi. Gordon has not been able to emulate his game one defensive performance, but he has been able to substitute his play with increased offensive proficiency. Air Gordon did everything for the Magic, leading the team in points (25), rebounds (7) and assists (5). Gordon does not excel at any one skill but can score in a variety of ways by using his athleticism to vault himself into his jump shot. In the absence of Vucevic’s usual contributions, Gordon has been asked to step up and though he is an excellent secondary player, he is struggling to fill the role as the number one option.

The Ring (The X-Factor) 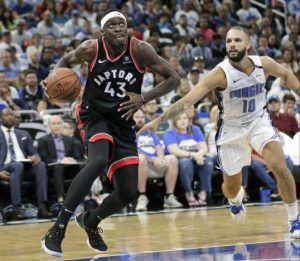 Pascal Siakam has set the playoffs on fire with relentless attacks to the rim earning himself quite the reputation. Siakam has shown incredible growth throughout the year and that hasn’t dropped one iota since the playoffs started. In fact, his growth seems to have accelerated as he is slowly becoming a superstar right before our eyes. His post-game no longer relies on his athleticism, instead he is using veteran moves, patience, and mature recognition of matchups and opportunities. He scored 16 points on 7/14 shooting from the floor to go with 6 rebounds, 2 assists and a block. Siakam has also played fantastic defence, erasing Jonathan Isaacs from existence like the snap of Thanos. Not enough can be said about how well Siakam is playing right now. He is the secret weapon that Coach Nurse has finally unleashed on the league.

Tonight we saw the first real appearance of Playoff Norm. Along with the positive bench play of Serge Ibaka, the combo guard stepped up for a big game. The Magic already had enough to contend with and seeing Powell go off was essentially the cup flowing over. Powell filled his role nicely, picking his spots and never doing too much. He let the game come to him and took advantage of the extra space brought on by the gravity of his teammates. Powell filled in the gaps and stuck the jumper with reliable efficiency. He shot 7/9 for 16 points, 4 rebounds and an assist. This was Powell’s best game and the thought of having yet another Raptor get hot will keep the Magic up at night. 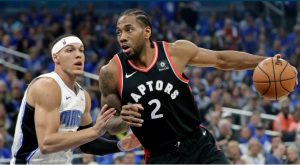 Kawhi Leonard shook off any lingering effects of the flu that stifled his performance in Game 3 to have an excellent night. Leonard is fantastic at recognizing opportunity and calculating the best way to strike. Whereas Pascal is a ball of frenzied athleticism, Kawhi attacks with stoic strength and precision. Leonard makes the game look incredibly simple; to the point that his magnificence can easily be overlooked. The Klaw poured in 34 points on 12/20 from the floor along with 6 rebounds, 2 assists, 2 steals and 2 blocks. Not only is Leonard one of the most intelligent players in the league, he may also be pound for pound one of the strongest. Kawhi has been head and shoulders above the competition and has solidified himself as the best player in this series. Leonard was exceptional tonight and a complete superstar in every sense of the word.

The Raptors are rolling and will now have a chance to close out the series at home on Tuesday night.