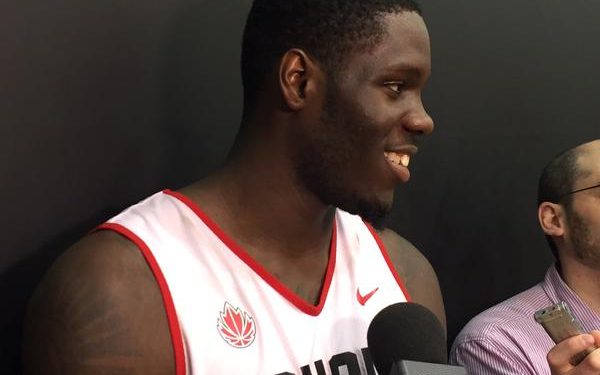 For complete coverage of the Canadian men’s and women’s teams at the Pan Am Games follow @devingray33 on Twitter and keep posted to North Pole Hoops!

With days to go before Canada Basketball’s women’s and men’s teams take on the Americas at the Toronto 2015 Pan Am Games, NPH got the chance to catch up with the stars of the show after a pair of practices at the ACC.

Both the men and women are excited to play in front of a home crowd and can feel the buzz building already through the city.

Here are the top 10 emotional, funny, and candid thoughts of several key members of the Canada Basketball men’s and women’s teams.

“We’ve been on the come-up. Everybody has been doing their part and putting in work on all different levels. It’s just a chance to really show what we’ve got.”

“Canada Basketball isn’t a one-time thing, it’s something you develop through and invest in it because they invest in you. It’s going to be motion, quick play, and if you like good team basketball you come and watch us.”

8: Kim Gaucher – Women’s Team Forward, on being idolized by a young Natalie Achonwa;

“Damn it that makes me really old doesn’t it?”

“The international game is a lot more physical, a lot more hand and body contact, and chippiness and you have to be mentally and emotionally strong to handle that as well”

“I love playing defence, that’s what I do and especially when there’s no three in the key it’s going to be like college again, blocking shots left and right.”

“The schedule is going to favour a team that has some good depth and that certainly plays into our favour. I think they’d take five games in five days over five practices in five days.”

“There’s big centres, then there’s guys that are 7-5. I want to see somebody stop that guy when we put him under the basket.”

“We need to get him here so if anyone can do anything about the weather in Newfoundland that would be great because they’ve been fogged in for two days straight.”

“In terms of what it does for me here it means nothing. When we play against Argentina think they’re going to be like ‘oh, you’re the rookie of the month in the WNBA?’ no they’re not. I don’t expect them to either.”

1: Nash and Triano on Development;

#CNIT – Above the Rim