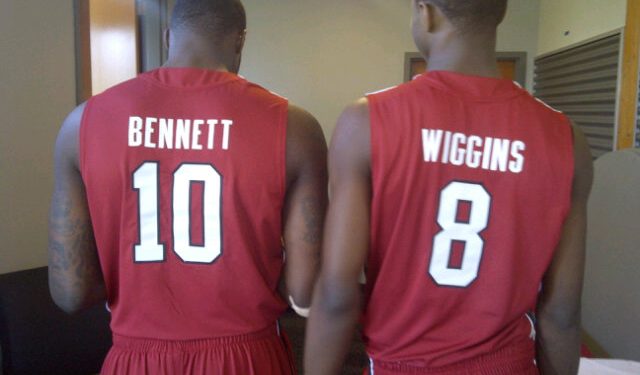 In an email conversation back and forth with Andy Grimsrud and Patrick J from PDW, we dissected the development of Bennett’s and Wiggins’s games, our first impressions of the would-be stars, and where their potential could take them.

DG – I had wanted to start this discussion on the two Canadian pups on the TimberWolves roster by asking about first impressions of the both of them. When you first saw them and/or first found out they were coming to Minnesota.

For myself I remember meeting Wiggins at a Canadian Junior team intrasquad scrimmage in 2012. I remember how poised and bored he seemed, though conscious of the attention. He actually said, “I know I’m who the people are here to see.” That’s telling. Also, the physical attributes were all there but the ballhandling and shooting didn’t look necessarily natural.

As for Bennett, he rolled through an Ontario Alumni game I was at sometime before he was drafted. He’d been at UNLV already and I knew he was lottery-bound, but thinking top-10. It was there he threw down the most powerful slam I’ve ever witnessed in person – two handed, literally rim-rocking. But other than that didn’t show out at this particular game.

Either of those remembrances line up with your first and/or continued feelings on Wiggins and Bennett?

AG – My first impression of Wiggins was watching his Kansas team play against Jabari Parker’s Duke team on ESPN. At that point in time, the Wolves were early in their last Kevin Love season, when playoff hopes were realistic. At that time, there was no reasonable expectation of Wiggins ending up on the Timberwolves, as they simply wouldn’t be drafting high enough to get him. That is my way of saying that I was less watching the game as a “pretend scout” and more just enjoying a good college basketball game (and that was a good game). I remember him sticking a few of his now-patented step-back jumpers, and sort of taking over the game down the stretch. Kansas won, and Wiggins was their best player.

My early impressions of him, in person, as a Timberwolf, were almost all positive ones. He is not flashy, but his athleticism pops out at you any time that you watch. His feet just seem to have a bounce that most players’ don’t. Watching him move laterally on defense, I saw an effortlessness that reminded me a little bit of Jrue Holiday, only Wiggins is much taller and longer than him. His defensive upside was apparent, from the first time I ever saw him play, live. On offense, he has a very smooth jump shot, with textbook form. His weakness is that he doesn’t handle the ball with a good enough comfort level to break defenders down off the dribble. I think he’s improving in that area, or at least finding more ways to accommodate his shaky handle, but that was something that stood out as a first impression.

On Bennett, both Patrick and I were very high on him when he was at UNLV. It started with some highlights that were impossible to ignore (the powerful slam you described is not uncommon for him, even in the NBA) and then watching some Rebels games and seeing how he had a rare combination of size and strength paired with a soft-touch jumper and nice ballhandling ability.

In the NBA, it’s obviously been a struggle for AB. I remember seeing him at Target Center in his rookie year, when he was a visiting player on the Cavs. I remember him hoisting up an airball and a few other ugly shots, and looking really out of shape. As a Timberwolf, his first impressions were quite good — he began the year on a hot shooting streak from the top of the key. Also, he does those two-handed, rim-rocking dunks that seriously remind me of a Young Shaq when he does them. He’s an unusually powerful dunker, and that’s hard to ignore as a first impression.

PJ – My first impression of Andrew Wiggins was similar to the ways in which I form (very) first impressions of a lot of young phenoms: YouTube. I believe–but can’t remember for certain–that these were the first two impressions I got of Wiggins (here and here), thanks to the Internet Superhighway. On the strength of so many of Jay Bilas’ favorite adjectives–long, athletic, upside, and more!–Andrew Wiggins made a lasting impression on me.

Still, I didn’t know what to make of Wiggins from a talent evaluation perspective. I don’t follow college basketball particularly closely, which means I didn’t follow Wiggins all that closely during his lone season at Kansas. What I knew was that his numbers were good, but not eye-popping. Another data point I had in my mind going into the 2014 NBA Draft was that Wiggins’ Kansas teammate, Joel Embiid, was being touted as the top NBA prospect in the draft. Embiid should be the #1 overall pick, most thought, but he couldn’t be because of the health concerns that follow him to this day. I was never down on Wiggins, but I came to buy in to the trope that Wiggins might lack a “killer-instinct” and that it wasn’t clear if, despite his obvious potential, he really “wanted to be great.”

In the vein of full disclosure, I had the opposite impression of Anthony Bennett going into the NBA draft compared with how I felt about Wiggins.

I stumbled onto Bennett the same way–YouTube, and the occasional nationally televised UNLV game. I thought he looked powerful, skilled, and composed. He looked like a combination of Charles Barkley and Larry Johnson. You could do worse than that.

What I didn’t get out of my superficial scouting of Bennett was that he would never be as comfortable applying his talent against NBA-level talent as he was at UNLV. Bennett still has the tools that made him the #1 overall pick in 2014, but he rarely takes the initiative to use them.

Check back tomorrow for Raised by Wolves: Part II where NPH and PDW explore Anthony Bennett’s role and future in the NBA.