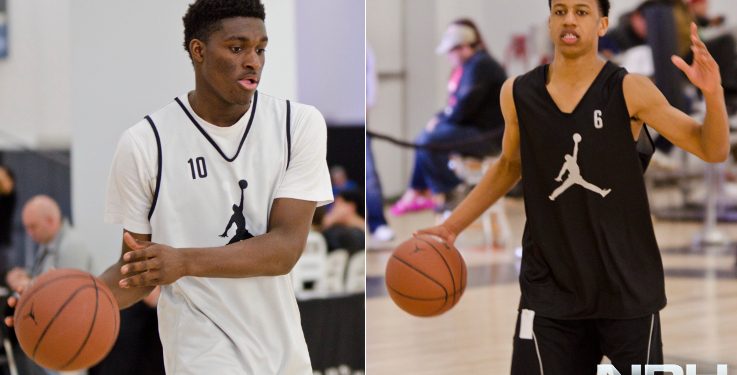 NEW YORK, NY–One Canadian will suit up for each team of the International Game of the Jordan Brand Classic this Friday. Last year Jamal Murray and Justin Jackson represented the red and white and were given high praises by NBA scouts. Murray soaked up every moment and walked away as MVP among highly touted prospects such as Ben Simmons and Thon Maker to name a couple. This year Anthony McNish (Father Henry Carr) and Jahvon Blair (St. Edmund Campion) will put on for the maple leaf.

As usual on day one, coaches were learning about their players and vice versa, while the young guys were taking in the experience as a whole. In today’s practice, coaches will expect that everyone has taken in the plays that were taught in yesterday’s practice and scouts are expecting to see a controlled scrimmage.

The overall talent level in this year’s event does not compare to the 2013 Jordan Brand International game. For this reason, this is an opportunity for any of the prospects to blow up on the North American basketball scene.

McNish will have an opportunity to step outside of the high post where he spent most of his high school season and begin the transition to the wing.

“I’m excited about it and looking forward to it. I feel like I will make the adjustment pretty quickly.”

As for Campion guard Blair, he is a virtual unknown and seems to be one of the few with primary ball handling responsibilities.

Three feature games will happen on Friday starting with the International game, with the middle game being the Regional Jordan Brand game which features Canadian Marial Shayok (Blair Academy). Shayok, formerly committed to Marquette, has received a release from the program after coaching staff changes were made. Shayok is expected to make a decision on where he will play his collegiate career in the near future.

We anticipate that Shayok’s impact on the regional game will be huge his size and slashing ability will set him apart.

Trey Lyles will cap off the week for Canadians in the All-American game that is stacked with talent that is committed to big name NCAA programs. Lyles will have his work cut out for him, going up against Kansas commit Cliff Alexander.

We’ll have you covered live from New York for the remainder of the event, look out for video interviews and highlight mixes coming your way soon.