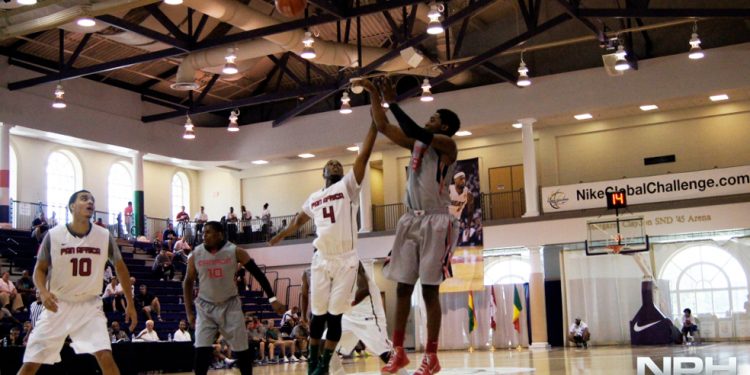 You think it’s easy being the top player in the Canadian 2015 class? Montaque Gill-Caesar makes it look that way, as you will see from the video below. The truth is, this young man puts in a great deal of work to keep on top. He has been the man on his high school team at Huntington Prep, led Canada at Nike Global Challenge, and CIA Bounce during a competitive Nike EYBL schedule.

Huntington Prep’s top prospect is being recruited by the likes of Illinois, Alabama, Missouri, Baylor and Purdue to name a few.

It is more than likely that we will catch Gill-Caesar in a Canadian uniform in the near future, specifically for the U18 team in Colorado this June.

He elevates his game after every few months because of the hours spent in the gym after practice. Head Coach at Huntington Prep, Rob Fulford has witnessed his work ethic and dedication to his craft.

“Teki is a gym rat. He goes back at nights to get up extra shots and is really dedicated to getting better. He is an elite shooter that can overpower most guards. One of his best attributes is how physical he is and has been getting better at taking advantage of that with straight line drives and attacking defenders shoulders.”

His game and physicals suggest that he is ready to contribute to an NCAA program after this year, but the Canadian basketball community, coaches recruiting him and the rest of the world will wait patiently to see if he commits to a program this year or returns for a fifth year.

For now sit back and enjoy the latest on Teki from City League Hoops.