Canadians in NCAA: New Career High For Wiggins With 29 Points 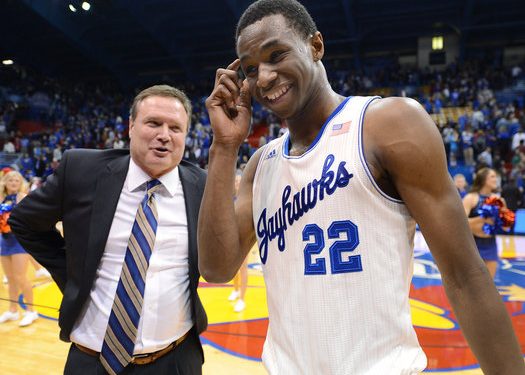 The first three names below resemble the order of the @NorthPoleHoops National Player Rankings for the high school class of 2013. It was a busy night of NCAA action on Wednesday as the usual suspects were back contributing big time for their teams.

Headlining the night is Andrew Wiggins, who’s making people think twice about doubting him as the number 1 pick in the 2014 NBA Draft.

Wiggins has stringed together back-to-back gems. After going for a career high 27 four days ago against TCU, Wiggins was back at it again setting a new mark at 29 points. Kansas won its 7th straight game as they beat Iowa State 92-81. The freshman phenom shot an efficient 10-16 from the field including 4 of 6 shooting from the land beyond along with nailing 5 of his 6 free-throw attempts. Just as we here at NPH predicted, Wiggins has come alive in conference play.

Against ranked opponents, Wiggins is averaging 18.75 ppg and 8 rpg while not necessarily the focal point of the Jayhawks offense.

The production that we’re seeing from him can be expected anytime Kansas sets up for a high major opponent. With March Madness approaching, Wiggins will routinely step up to the challenge and have more games like the one he had last night.

Continuing to prove that he’s one of, if not, the best PG in the NCAA. The typical composed demeanor of Tyler Ennis helped Syracuse cruise towards another win, with the team improving to 20-0 after squeezing out the win over Wake Forest, 67-57. Both teams shot poorly and Ennis started the game scoreless in the first half but remained in the zone and went 6-8 in the second half. Coach Jim Boeheim needed Ennis to play all 40 minutes in this one. Nothing to celebrate here though, as Syracuse will look to set a new record of 21 straight wins for the Orange against the 16th ranked Duke Blue Devils on Saturday.

Finally got his first conference win as his South Carolina Gamecocks beat Texas A&M 80-52. Notice set a new career high with 19 points (6-8 FG, 1-2 3PT, 6-6 FT) snatching 4 rebounds and adding 3 assists. Notice has had a pretty solid freshmen campaign considering that he was pushing into the starting point guard role after senior point guard Bruce Ellington’s decided forgo his last season for the NFL. Notice’s turnovers have been a bit of a problem as he is averaging 2.4 a game.

Dwight Powell (Toronto, ON) and Stefan Nastic’s (Thornhill, ON) Stanford Cardinals were stymied by the Arizona Wildcats defense down the stretch losing 60-57 Wednesday night. Powell scored 13 points (5-8 FG, 3-6 FT) adding 6 rebounds and one assists while Nastic put in 10 points (4-7 FG, 2-2 FT) grabbed 5 rebounds and added one assist and block. Stanford competed hard but were held scoreless for nearly nine minutes down the stretch before Powell made a layup to tie the game up at 55 a piece with 1:21 left in the second half. However, the Cardinals didn’t make a field goal after that only converting on two free-throws after Arizona’s Nick Johnson hit what would ultimately be the game winning three with 50 seconds left in the game.

Nnearly missed a double-double as Binghamton lost its sixth straight game 73-61 to UMBC. Madray scored 20 points (6-12 FG, 2-6 3PT, 6-9 FT) and grabbed 9 rebounds in 34 minutes of action. Despite Madray’s solid numbers, his team only shot 35.5% from the field and converted on 4-20 three-point attempts. This game marked the fourth time this season Madray had scored 20 points or more.