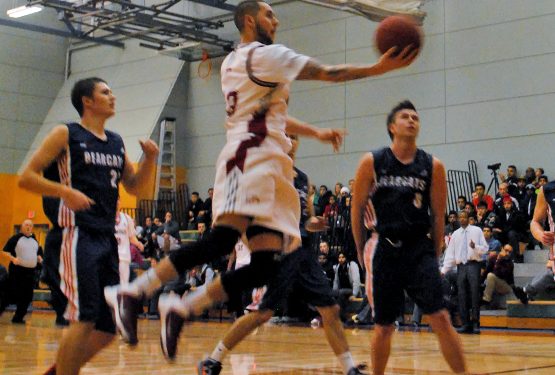 It’s always hard to gain a quality perspective on a team after just their first game of the season – especially when it’s against a perennial bottom-feeder – so I’m going to try not to jump to any quick conclusions.

But on Friday night, the Kwantlen Polytechnic University Eagles impressed a packed house with a 100-89 win over the Columbia Bible College Bearcats.

Aaron Ram led all scorers with 38 points on 14 for 27 shooting, including three from long range and 7-8 from the charity stripe.

“I know he had a really good game, but in my mind, I expected that,” said Kwantlen head coach Stefon Wilson. “It’s his third year, he’s a good player, so I expected him to play well. He won’t statistically play like that every night, but he hit some shots, and I expected him to have the game he did.”

Kwantlen pounced on the Bearcats right from the tip, applying relentless pressure on defense and running their transition offense at a frenetic pace. It was a little sloppy and chaotic at times, but that’s expected given the anxiety and nerves that go hand-in-hand with a home opener.

Eagles rookie Devonté Pierce got the crowd fired up with countless athletic plays in the first frame, including a steal and subsequent dunk that pushed Kwantlen’s lead to 29-19 heading into the second quarter.

CBC began to find their groove in the second half, largely due to the play of third-year guard Marcio Juk, who dropped 23 of his team-high 26 points in the final 20 minutes.

“Juk is a great shooter, and we started closing out with our hands down,” said Wilson.

But the Eagles’ deep rotation and offensive output from Ram – who notched 23 second-half points of his own – kept the Bearcats out of striking distance.

The Abbotsford school brought the deficit to within single digits midway through the fourth quarter, but each clutch shot from Juk was quickly answered by the starting backcourt trio of Ram, Pierce and third-year Nii-Nortey Engmann – who combined for over 70 per cent of the Eagles offensive output.

Yet despite Kwantlen’s ability to hold on down the stretch, Wilson was noticeably frustrated with his squad’s tendency to allow continued looks from long range. He mentioned their lack of closing out on three-point shooters at least five times in our post-game interview.

It’s clear that the third-year bench boss has high expectations for his team – specifically on the defensive end – but his message didn’t fall on deaf ears. The Eagles limited the Bearcats to 38.7 per cent shooting from the field, and just 21.7 per cent from behind the arc.

Ram, who struggled with his shot selection and consistency last season, has emerged as an early leader for the Eagles. He didn’t force up bad looks on his drives, didn’t launch many ill-advised threes, and stayed active on both ends of the glass.

Fifth-year centre Ali Bosir, the PacWest’s regular season leader in both points and rebounds in 2012-13, grabbed his customary 15 rebounds, but became more a facilitator than a last resort, dishing out six assists from his office on the block.

I love it when Bosir goes off for 40 and 20, but it was refreshing to see him not have to shoulder the burden offensively – a sign that the Eagles have finally found production throughout their roster.

Both teams got a break on Saturday, with the only game scheduled in the PacWest taking place in Victoria as Camosun College hosts Vancouver Island University. Though next week, the Eagles and Bearcats travel across the Georgia Strait to take on each island squad.