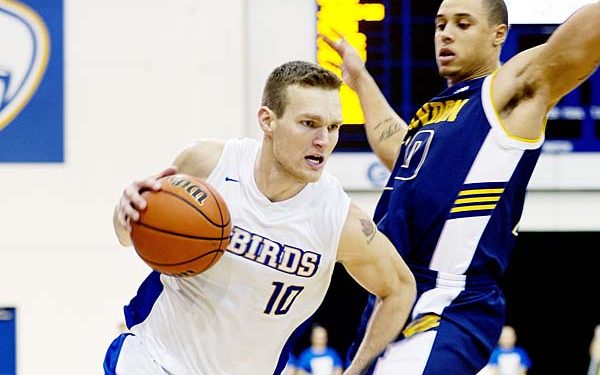 VANCOUVER, BC– After a stellar university career, UBC Thunderbirds men’s basketball player Doug Plumb (Pitt Meadows, BC) has signed a contract to play professionally in Hungary.

In the fall, Plumb [NPH #6-ranked Canadian University Player] will join Zalakerámia ZTE KK of the Nemzeti Bajnokság I/A, the top league in Hungary. The club has won four national titles, with the most recent coming in 2010. It is located in Zalaegerszeg, a city of about 62,000 people.”I’m very excited to be continuing my career with ZTE KK,” said Plumb. “The organization has a rich history of success and I am looking forward to helping them compete and contend for the Hungarian league title.”

Plumb scored 1326 points in 97 non-conference, regular season and playoff appearances with UBC for an average of 13.7 points a game. He also grabbed 457 rebounds (4.7 per game) over his time with the T-Birds.

This past season, the 6-foot-4 guard was a First Team Canada West All-Star and a Second Team CIS All-Canadian after leading his squad to a conference championship and a berth to the CIS Final Eight in Ottawa. He averaged 14.9 points and 5.2 rebounds a game.

“We are thrilled for Doug that he will continue his basketball career as a professional athlete,” said UBC head coach Kevin Hanson. “He has landed on a top team in a great league. He has worked exceptionally hard to get to this stage of his career and we are all very excited for him. We wish him the best as he enters this next stage of his life.”

Plumb won’t be the first UBC T-Bird to suit up for ZTE KK. J.D. Jackson, the school’s all-time leading scorer, played for ZTE KK during the 1993-94 season alongside current T-Birds assistant coach Spencer McKay, who served as a point of contact between Plumb and the Hungarian club.

“I would like to thank coach (Kevin) Hanson and coach (Spencer) McKay for everything they have done for me through the process and to all the Thunderbirds fans for their support along the way. Go ‘Birds!”

Andrew Wiggins Out for U19 World Champions…Who ...