Mychal Mulder Puts On a Show as Catholic Central Advances to OFSAA Championships! 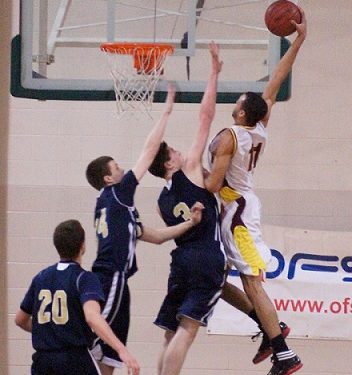 WINDSOR,ON–The host team and #1 seed of AAA OFSAA, Catholic Central steamrolled through another opponent, defeating Notre Dame (Burlington) 64-41 moving to 4-0 in the tournament. The Windsor representative is en route to the championships to take on Ottawa’s St Patrick Irish.

Following a Mychal Mulder smash on a helpless Notre Dame defender near the end of the second quarter, the game spiralled downward for Notre Dame.

In the second half, Mulder practically hosted a slam dunk competition against himself, connecting on about eight dunks to the delight of the packed house.

Gayle is shooting the ball with great confidence and has been a major part of Catholic Central’s success.

Marcus Calloo displayed his elite playmaking abilities through his vision and passing ability, setting up teammates by drawing double teams off of penetration or spoon feeding players in transition, where he thrives.

For Notre Dame it was Guelph Commit Daniel Dooley and Jordan Scott who lead with 11 points apiece.

Catholic Central will now take on St Patrick’s from Ottawa, a gritty team with a lot of heart. CCH is certainly the heavy favourite with loads of size, athleticism and a boisterous home crowd