The Rams Bounce Back, Enter The Playoffs On The Right Note. 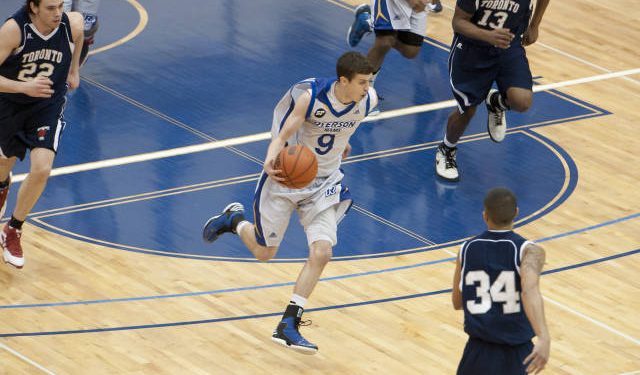 TORONTO, ON — The Ryerson Rams halted a three-game losing skid with a convincing 86-51 win over the visiting Toronto Varsity Blues.

The Rams answered at home against this same Varsity Blues, and the matchup ended up as what it looked like on paper — a blowout. Ryerson led 24-10 after the first quarter, 44-22 at halftime, and 72-32 after 30 minutes of play. The fourth quarter was the only time where Toronto outscored Ryerson, with 19 points to the Rams’ 14.

One night after the Varsity Blues sent out its graduation players Ben Garvin and Arun Kumar in style in the last home games of their career, it was Ryerson’s turn. Nem Stankovic, Gavin Berry and Gebrekerestos were acknowledged before the game, and head coach Roy Rana decide to give them the start for this game.

After the game, Gebrekerestos told NPH that it felt “bittersweet” to have played in front of the Rams faithful for the last time in the regular season. “It’s good, but it’s sad at the same time,” he said. “It feels good to get a lot of support from the community.”

Berry, a fan favourite over the last two seasons, will miss playing for the Rams. “I’m very lucky to be on this team. I back up maybe the best guard combination in the entire country,” he said.

In the first game of the back-to-back, the loss hurts the Rams the most because it cost them a shot at second place in the OUA East division and all the perks that come with it—a first-round bye in the OUA playoffs, and home-field advantage in the second. “We’re not done,” Berry said. “We want to make the Nationals, we want to make the Final Four (at home) in the OUA. There’s no doubt about that.”

Offensively, Ben Garvin and Arun Kumar led Toronto with 10 points each but the team ran into the wall that was the Rams’ defense, shooting only 31.7 per cent from the field.

Despite the high score, no player dominated for the Rams. Ostap Choliy had 18 points, while Bjorn Michaelsen poured in 10—but another six scored 8 or 9 points each. Just as important, 12 Rams players played no less than nine minutes and no more than 20. Rana gave everyone some playing time, and everyone answered.

As the third seed, next for the Rams is a home playoff game against the York Lions on Feb. 20. “It’s a step-by-step process,” Gebrekerestos said. “We will have to win a lot of games to get where we want to be.”

Should they win, there would be a date with the Gee-Gees just three days later, in the nation’s capital rather than in Toronto. But the Rams won’t be looking ahead, past York. Not this time.