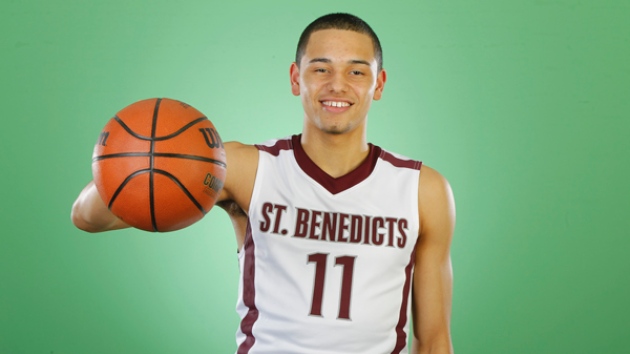 There was never any doubt that Andrew Wiggins would be selected as a McDonald’s All-American, being the #1-ranked player in the world. The Canadian star makes it four years straight that a player from this side of the border has representation in the prestigious game. He will look to make yet another statement in Chicago on April 3rd at the United Centre.

However, there was some anticipation for a few other Canadian nominees; Tyler Ennis, Xavier Rathan-Mayes (NPH #2 & #3-ranked prospects) were next on the bubble. Mikyle McIntosh, Isaiah Watkins were other Canadians on the nominee list.

No other canucks were selected.

A week after Wiggins exploded for 57 points in a rebuttal to a Sports Illustrated article, Ennis had a message of his own to send; 53 messages to be exact.

The 6’2 floor general dropped a career-high 53 points in a 116-56 victory for St Benedict’s over Eastern (Jersey), after not seeing his name on the McDonald’s All-American list.

After asking Ennis about his career night and if it was related to not being selected, he replied with a brief but firm, “of course.”

The Brampton, Ontario product however was selected for the Jordan Brand Classic to be played in Brooklyn on April 13. He will connect with Wiggins on the same team and look to make another statement.

Ennis and Wiggins are very comfortable playing together as they were teammates on CIA Bounce along with the Canadian Junior National team.

Next up, NPH will catch Rathan-Mayes, Wiggins and Huntington as they travel to Hamilton to take on United Leadership Academy this Sunday, February 17 @ McMaster.

Get your popcorn ready!