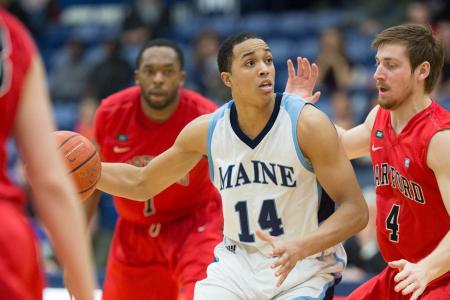 We can’t go as far as saying we’ve arrived, but we are arriving. The explosion of Canadian talent that has descended upon the NCAA is unquestionable. The whispers of “Canada has talent” is quickly turning into the worst kept secret in basketball. Wednesday night was a prime example of what’s been happening on a nightly basis in Division I, and it won’t be long before it’s happening in the NBA.

Myck Kabongo made his long awaited season debut on Wednesday night for the Texas Longhorns who have been struggling (to put it lightly) in his absence. The Longhorns who were 2-8 in BIG 12 play without their point guard desperately needed a shot in the arm and Kabongo provided that. The Toronto, Ontario native finished the game with 13 points, 7 rebounds, and 5 assists in the Longhorns 89-86 win over Iowa St.

While everyone had their eyes on number 12 and rightfully so, it was a fellow Canadian who stole the stat line spotlight. Melvin Ejim posted his 10th double-double of the season posting 20 points and 16 rebounds. Ejim is averaging a near double-double of 10.3 points and 9.4 rebounds in his junior season for the Cyclones. Many hesitate to speak of him as a star; but when you’re leading the BIG 12 in rebounds and double-doubles, you cannot deny it. Keep tabs as he could be appearing on draft boards in the near future.

The combination of Dyshawn Pierre and Justin Edwards was an absolute nightmare for opposing coaches in high school in Ontario when they played at Anderson CI in Whitby Ontario. The once dominant tag team have since went their separate ways, but have continued their exceptional individual play in the NCAA.

Pierre, a freshmen at the University of Dayton averaging 7.8 points and 4.8 rebounds per game recorded his first career double-double in a Flyers uniform of 15 points and 10 rebounds in their 75-72 loss to Rhode Island.

Meanwhile his long-time friend Justin Edwards was busy working on an 18 point, 8 rebound and 5 assists night, which included the game winning basket with 0.7 seconds on the clock in Maine’s 66-64 win over Harford. Edwards in his second year is putting up major numbers averaging 17 points, 5 rebounds and 3.7 assists for the Black Bears.