Undefeated Cape Breton Capers as Good as Advertised…Hungry For More 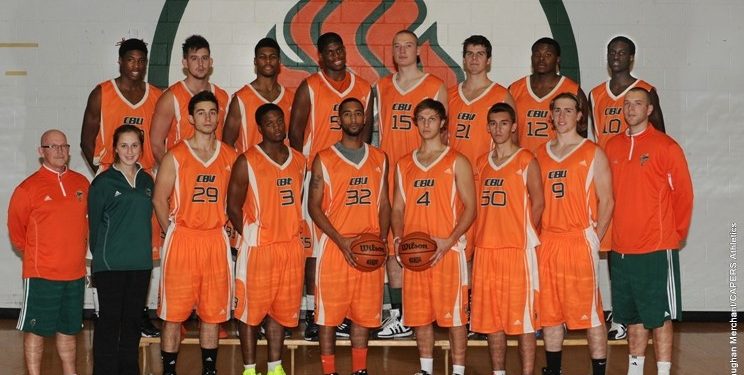 CBU Flies Out to 7-0 Record, Will Battle Against Undefeated Acadia in January | CBU Athletics

CAPE BRETON, NS–In the minds of the basketball world on the East Coast, the Cape Breton Capers entered the 2012/13 CIS season as a very good and intriguing team with reigning AUS MVP Jimmy Dorsey who averaged a near triple double (22.8ppg, 8.87ast, 7.7reb & 2.78stl) coupled with a solid core.

However, the intrigue came in to play with what was behind Dorsey…the hiring of new Coach Matt Skinn, [who spent four years leading the X women], along with the arrival of super rookie Shaquille Keith.

With the Capers sitting at 7-0, the intrigue continues but it has shifted from “wow these guys could be really good” to “WOW these guys are really good.”

Coach Matt Skinn obviously credits his team success to NPH #2-Ranked player in the nation James Dorsey, stating “Jimmy has been the model player for us on and off the court.  He has bought into the system, the style of play, and has been a leader on and off the court for our team.”

From a basketball perspective, Dorsey has picked up where he left off in 2013 by leading the AUS in scoring at 25.4ppg and also chipping in with 4.3 APG and 5 RPG.

Shaq Keith, NPH #10-Ranked player in the CIS, a freshman out of Brampton Ontario, has become a sensational side kick to Dorsey averaging 16.6 PPG, 2.4 APG and 4 RPG.  Coach Skinn describes Keith as “a relentless worker, who is constantly watching video and in the gym working on his game.”

In addition to these players, the Capers major production is rounded out by Cedric Kasongo, Sean McCormick, Arild Greugies and Meshack Lufile who average a combined 39.6ppg, 22.2rebs.

In speaking about preseason expectations Coach Skinn says “you never quite know what you are going to have until you play games, and specifically play regular season games. The staff and myself were excited with the possibilities of the roster, but even today we feel we have a long way to go in terms of learning and growing.”

Coach Skinn has brought a high standard to the Capers program, “we talk about doing things the right way off and on the court on a daily basis. We have to be visible and proud members of the university community.”

He continues saying “everyone within the program knows and understands these standards, has bought in to them, and will continue to strive to represent CBU to the best of their ability everyday”.

Skinn is not a complacent person and the Capers are going to continue to push for the top spot. The Capers growth as a young team will be measured weekly with the weekend of January 19 being a huge measuring stick when Acadia roles into town.

With a chance that both teams could be undefeated or at the very least battling for the top spot in the AUS and the higher CIS ranking, this is a date for all CIS basketball fans to circle and pay attention to.

In the meantime, the rising Capers prepare for battle.