DYouville Panthers: Happy But Not Satisfied 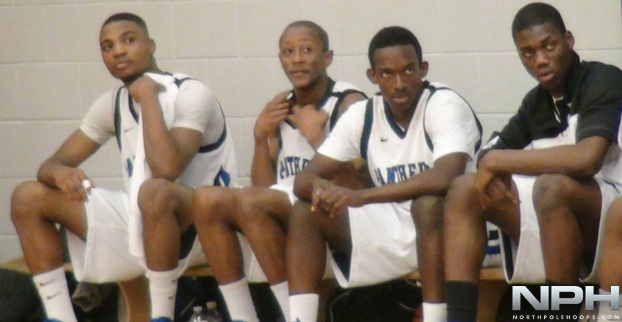 D’Youville Has great depth from one to fifteen

BRAMPTON, ON–Take a look at D’Youville. Not the D’Youville from September, but December’s version of the Panthers. If you have been paying attention, the Brampton contingent has been growing as a team.

Early in the pre-season, D’Youville suffered a 72-61 loss to NPH #10-Ranked Holy Trinity. Just over a week after, they dropped a close game to the #1 Team in the Nation, Father Henry Carr by a score of 59-55.

Only the flipside, the Panthers have defeated a strong Crescent team 63-61 along with victories over Mother Teresa, Vaughan and Newmarket to hold on their team resume.

There is no doubt that the Panthers can compete with the best, in large part thanks to their team depth. The never-ending bench was on full display in a 78-58 victory over a talented Grand River team featuring NPH #2-Ranked 2016 prospect Jamal Murray, and Murtada Khamis of Kitchener, Ontario.

“It’s an adjustment we made from last year where we didn’t feel like we got enough guys in. Last year we over-played some guys which lead to mistakes due to them being tired,” explained DY Head Coach Carlo Zoffranieri.

On the inside, this squad has several bodies hovering around the 6’5 mark including Kenny Ejim, Addy Ogunye, Ovie Eyamaro & Brandon Goin-Bailey.

At the point guard position, James Agyeman leads the way on both ends of the floor with stifling defense and running the DY offense. On the wings, Rayon Miller & Josiah Riley get it done on penetration, attacking the basket. Riley is a budding prospect, also a two-way player that uses his length and later quickness to lock up defenders while attacking at will offensively.

We can’t forget Abed Emran, the sniper who nailed six three-balls en route to a game-high 18 point for D’Youville.

“This is where we need to be. There’s good basketball all over the province, and I’m happy where our team is at right now,” Zoffranieri told NPH.

Is it fair to say that you are happy but not satisfied?

“Absolutely,” Zoffranieri quickly replied with a nod of acceptance.

D’Youville has moved on to play fellow Brampton representative Fletcher’s Meadow in the semi-finals of the Campion Showdown. Cameron Heights out of Kitchener will take on Western Tech in the seocnd semi-final game.