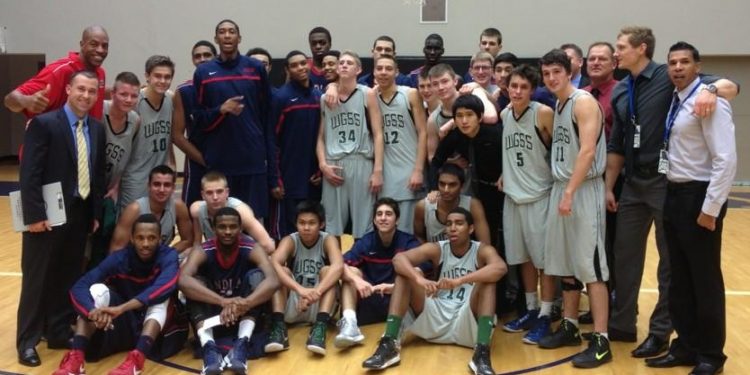 LANGLEY, BC–Unfortunately for fans of  Walnut Grove –who turned out in full force and were cheering boisterously until the final whistle – the feature game of the first day was close for only a few minutes, ending in a 118-55 Findlay blowout victory.

Fortunately, the Gators were matched up against arguably the top prep program in the United States, and everyone in attendance was treated to an outstanding evening of basketball.

The Findlay Prep Pilots start five seniors, all of whom will be playing at high-major NCAA Division I schools next season: 6-4 point guard Nigel Williams-Goss will attend the nearby University of Washington, and his future head coach Lorenzo Romar was in attendance; 6-3 guard Stanford Robinson is heading to Indiana; 6-4 guard Allerik Freeman is a UCLA commit; 6-11 forward Christian Wood, who lead the team with 21 points, 11 rebounds, and 3 highlight reel blocks, will head to UNLV;  and 6-9 forward Gavin Schilling is waiting until the season is over to make his decision, but has offers from Minnesota, Illinois, UCLA and Oregon State, amongst others.

Findlay’s starting five all scored in double figures, and combined to miss just 13 of their 47 attempts from the field, good for 72% on the game. Findlay’s bench performed almost as well, and as a team the Pilots shot 68% from the field, despite connecting on just one of their twelve three point attempts.

The scoresheet will not reflect this, but 2014 Walnut Grove guard Jadon Cohee held his own against against a defense that was keyed to stop him. When Cohee was on the ball, the Pilots would pressure him relentlessly, picking up the 6-4 guard full court and aggressively trapping him on pick and rolls.

Off the ball, Findlay used their bigger guards to face-guard Cohee, and were able to deny him any easy looks. To make matters worse, Walnut Grove lacked a second ball-handler that could deal with Findlay’s pressure, so Cohee was left to handle the lead guard duties for a majority of the time he was in the game.

Senior forward Paul Getz was Walnut Grove’s leading scorer with 17 points on an efficient 6-10 from the field and 2-2 from the three point line.

The lone Canadian on the Findlay Prep roster, 2015 guard Jalen Poyser, finished the game with 4 points – two of which came on a spectacular two handed dunk – and 2 assists in eight minutes of play. Findlay Head Coach Todd Simon told NPH that even though the 6-4 Brampton, ON native joined the team late, causing him to miss the early season strength and conditioning period, he has been holding his own in practice against Findlay’s older and stronger guards, and when given time in games he has performed well.

“He’s athletic, he plays hard, and he did a lot of good things in there today. “ Coach Simon said. “He’s acclimated himself well, and he has an extremely bright future”