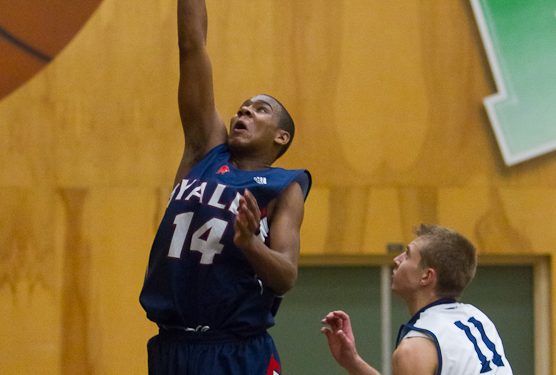 Abbotsford, BC – In a game that was close at the half, the Yale Lions (#2-Ranked by The Province) took over at both ends of the floor in the second half and dispatched the #10 provincially-Ranked Burnaby South Rebels 105-78 Friday night.

The Lions were led by point guard Jauquin Bennett-Boire (2015) and wing JJ Pankratz (2013). The 6-2 Bennett-Boire finished with a game high 33 points and displayed poise well beyond his years.

Bennett-Boire is already one of the best young players in Canada – as evidenced by his invite to the U-17 National team tryout this past summer – and it’s exciting to know that he has three seasons of high school basketball left to play.

Pankratz, who recently committed to play at NCAA Division II Simon Fraser University next season, is a versatile wing player who has great range on his jumper, is deceptively quick off the dribble, and did a great job guarding Burnaby South point guard Taylor Smith for extended stretches.

Pankratz and Bennett-Boire also anchor a very impressive Yale defense. The Lions were able hound Burnaby South into numerous turnovers, leading to easy transition baskets, and also forced a number of shot clock violations in the second half.

For Burnaby South, junior guards Taylor Smith and Martin Bogajev led the way. The 6-0 Smith displayed a picture perfect shooting stroke, and the ability to get his shot off in traffic, off the dribble, and coming off screens. Smith was also very active defensively, creating a number of turnovers and tipping a number of passes to slow down Yale’s fast break.

At 5-11, Bogajev may be undersized, but he is very strong with the ball, and showed a great ability to get to the rim and finish through contact.

Also for South, 6-6 senior forward Dejan Posavljak showed off an improved post game, finishing with 15 points in the loss.

With the win, Yale advances to the final of The Big Ball Tournament and will host Luka Zaharijevic Kitsilano Blue Demons in Saturday night’s championship game (8:45pm start). Burnaby South will face off against North Surrey at 7pm in the third place game.