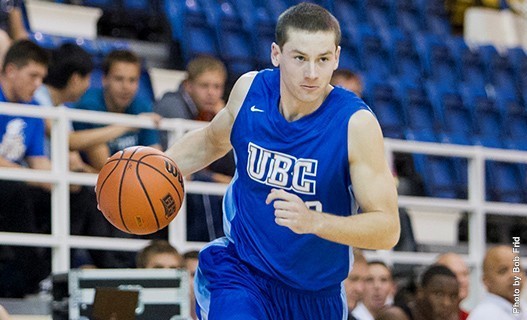 Geoff Pippus nails 5-8 from beyond the arc for a team high 18. | PHOTO COURTESY: Bob Frid

Vancouver, B.C.–In the second game of a double header, the score tends to be a bit closer.  Errors tightened up, matchups adjusted, and a little bit more physical than the last game with brewing animosity for the team who lost the first game.  The second matchup between the UBC Thunderbirds and the TWU Spartans didn’t quite vary in outcome from the night before, however this game was very tightly contested until the closing minutes.

Just the night before the two squared off at the Langley Events Centre. UBC edged the Spartans narrowly, even without starting forward Brylle Kamen, who is out nursing a hamstring injury.  Without their energetic spark plug the Thunderbirds relied on guard O’Brian Wallace who poured in 34 points and Doug Plumb who added 22 points on just 13 field goal attempts.  The final score was 91-84 with the score indicating a high voltage, fast paced match up.

The two teams came out hot and were awaiting the rematch. TWU’s CCAA transfer, Mark Perrin, was the martyr for their anxiousness to get on the floor.  He started off the game with a big three pointer as well as a block on rookie guard Jordan Jensen-Whyte (in which he added a stare down that might cost him a technical foul in the NBA).  However this excited energy would also resemble their downfall.

The game stayed close up until the three minute mark of the fourth quarter. As the game came down to a matter of one or two buckets TWU was forcing the issue and  jacking up pull up threes with 18 seconds left on the shot clock.  With this said, this was a recurring theme for both teams, but it did end up coming back to haunt the Spartans.  Turnovers and poor shot selection left the outcome of the game in the air.

UBC had two major contributors that may not have expected to play such a huge role down the stretch.  Of course Doug Plumb and O’Brian Wallace played good games and contributed as the elders of the team.  But young guns Jordan Jensen Whyte (finished with 17 points), Isaiah Solomon (11 points), and Geoff Pippus (17 points) truly sealed the deal for the Thunderbirds.

At the very start of the third quarter Whyte showed a great deal of aggressiveness, hitting a three and on the ensuing play practically dunking all over the TWU defense, with a slew of good drives to the hoop to follow.  Moreover, when guard play changed into the hands of Solomon he hit two gorgeous high arching floaters and controlled the tempo by slowing down the pace for the Thunderbirds.

Geoff Pippus put the proverbial “nail in the coffin”.  He had begun the game with three shots from beyond the arch in the opening frame.  And when his number was called in the fourth, he responded.  He hit two huge threes in the final four minutes of the fourth which sparked a huge Thunderbird run.

The Spartans played a good three quarters, but could not answer the final run by UBC.  “It was a lack of execution and turnovers down the stretch that killed us,” remarked coach Scott Allen of the Spartens.

They showed great promise against the number two team in the country.  Eli Mara tried to slow down the offense at times to gather the troops, but found himself trying too hard to set people up, as opposed to using his own talents to get himself a shot. Denmark McDonald played great giving his team 18 points, as well as veteran guard Tristan Smith who had 14.

Mark Perrin looked fantastic, providing 16 points for his team.  However he is a ball dominant player, taking many shots to get his numbers, and some of which  coach Allen did not draw up in the game plan.  He is making a transition from the CCAA to the CIS, where he will find his stride and score more efficiently within the offense, in due time.  This could make the Spartans very deadly this season.

As for the Thunderbirds, they take the court next weekend for another double header, but it will be their home openers at War Memorial Gym.