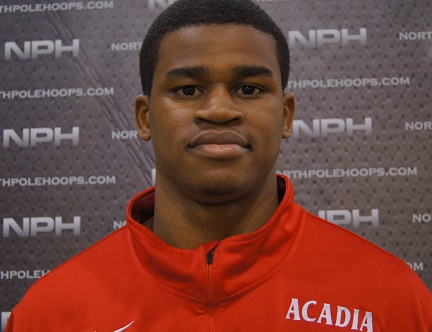 WOLFEVILLE,NS–In Acadia’s first preseason game at home they definitely got their Axemen fans excited about the upcoming season as the Saint Mary’s Huskies came to town.

In the AUS we don’t get the luxury of conference teams going head to head in the preseason much but because of a schedule mix up we got a look at an upcoming SMU team with new Head Coach Jonah Taussig.

The first quarter lived up to the billing as SMU was very aggressive defensively and opened up a 8-4 lead about midway though. Then Jonathon Tull who started all three games last weekend came off the bench and lead Acadia on a 12-8 run to knot it at 16-16 at the end of the quarter.

Acadia who is always exuberant seemed to be highly motivated for this game and showed excellent team unity as they moved the ball and attacked the rim off quick ball reversals and out of transition. Anthony Ashe and Jonathon Tull led the rim attack in the second quarter taking full advantage of SMU’s aggressive over play.  Acadia outscored the Huskies 31-16 in the quarter with exceptional all around bench play.

SMU’s 11 offensive boards and Riley Halpin’s solid 10 points in the half and aggressive play kept the game from being a complete blowout at the half.

The Huskies came out in the second half with some reserve, to control penetration and Acadia showed their trademark long range shooting with two quick threes by Shaquille Smith and Jonathon Tull; this chased SMU into a quick time out and they never seemed to demonstrate and real fight with the lead ballooning to 25.

Acadia put together a solid team game on both ends of the floor with four players scoring in double digits in route to a 91-71 win. If this unity and penetrate first style continues when Tyler Scott, Anthony Sears and Sean Stoqua return to the lineup, look for the Axemen to continue this dominance throughout the AUS.

The lone bright spot for SMU was local boy Riley Halpin who was the only Husky who seemed to compete every second he was on the floor which by the way was 39 minutes.