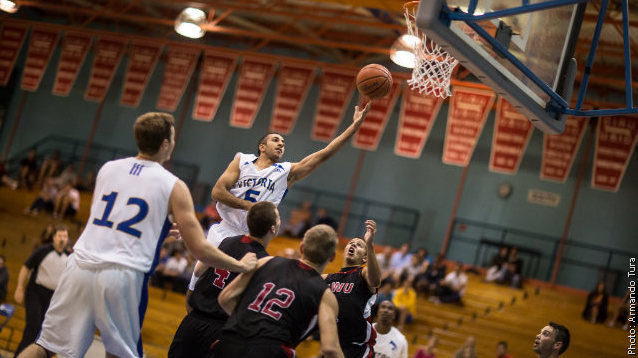 Vijay Dhillon on the Drive

VICTORIA, BC–The Vikes opened their preseason, playing host to NCAA opponent, Eastern Washington of the Big Sky Conference. Right from the opening tip, it became apparent that the size of the Eagles frontcourt was going to pose serious problems for a young Vikes squad. Listed at 7’1 and 6’10 respectively, Frederik Jorg and Martin Seiforth limited Victoria’s second chance points and after blocking numerous Vikes shots in the first quarter, appeared to scare away many potential drives. The game would end in a 77-58 victory for the visiting Eagles.

The first quarter was extremely scrappy, with both teams committing many careless turnovers and settling for outside jumpers. This was in the Vikes favour, as the first ended with them up 15-13. As the second quarter opened up, and the Vikes second unit came on, the Eagles jumped all over them expanding the lead to 27-17 with 5 minutes to go in the first half.

The Vikes were not getting much in transition, and relied heavily on outside shooting, being lead by Michael Acheampong and Terrell Davis. Careless turnovers for the UVic plagued them throughout the game, and the second quarter was no exception as it ended with the Eagles leading 38-24.

The first half lead was undoubtedly a result of Eastern Washington’s superior size and outside shooting in combination with a Victoria team who looked like they were still getting their feet underneath them.

However, the beginning of the third quarter was a different story. The Vikes came out playing inspired basketball and quickly made everyone forget about the substantial size difference. They would cut the lead to 45-40 with four minutes remaining in the third quarter. This was the result of pushing the basketball in transition and limiting second chances. However, that would be as close as the Vikes would get, as the Eagles knocked down a couple of threes and killed the momentum.

Freshman guard Danny Powell reaped the benefits of being left unguarded behind the arc, as he knocked down numerous threes and would finish the game with 16 points in all. The third quarter ended with the Eagles up 54-47. A run at the start of the fourth would effectively put the game out of reach for the Vikes, as the starters sat for the majority of the last quarter.

Acheampong and Davis lead the Vikes with 16 and 14 respectively. The Eagles were lead by Powell with 16 points and 10 rebounds, and Colin Chiverton with 14 and 7.

A bright spot for the Vikes could be the potential of former BC high school MVP (2011) Vijay Dhillon who looked smooth and confident, hitting a couple pull-up jumpers, to go with some hard drives to the hole. Look for him to be a source of offense for the Vikes heading into the regular season.

The Vikes will continue their pre-season with their next game against UVic Alumni on September 28 at Mckinnon Gym.