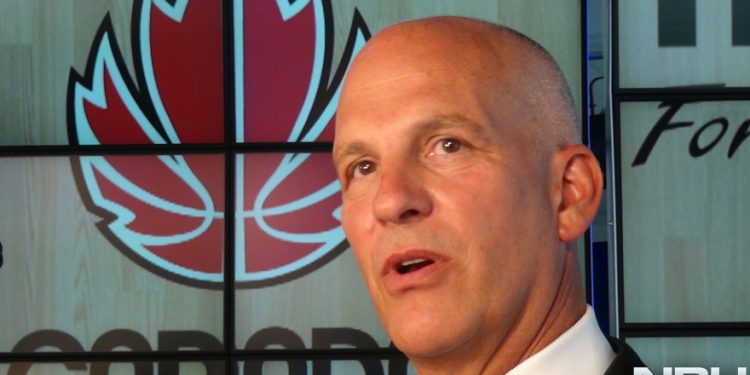 “I know that Jay is the right man for this job” declared Nash.  “He is a confirmed and respected leader in the basketball community and he has the experience and knowledge to lead us towards our goal of becoming one of the leading basketball nations.”

Triano, 53, becomes the 10th head coach of the senior men’s national team since 1954. The Niagara Falls native has an outstanding coaching pedigree, as well as being an accomplished player and three-time Olympian.

He first worked with the senior men’s national team as assistant coach and in 1998 he took on the role as head coach, which he kept until 2004, posting a 52-42 (.553) record. During this time, Triano led the national team to compete at Sydney 2000 Olympic Games.

Triano became the first Canadian born and Canadian trained coach in the NBA when he joined the Raptors in 2002 as an assistant coach. He then was promoted to head coach during the 2008-2009 season and held the position until the end of the 2010-2011 season.  To add to his international recognition, in 2010 he was named assistant coach for the 2010 USA Basketball Team, becoming the first non-American coach in USA basketball history.

“Being an athlete on three different Olympic teams was a great honour, but being able to lead 12 players and a dedicated staff to the Sydney Olympics was even more special,” said newly-named head coach, Jay Triano. “I look forward to working with Steve and Rowan again to put together a staff that will help grow the game of basketball and make our way back to the Olympic Games and prominence on the world stage.

“This is an exciting time for basketball in Canada and I am excited to embrace the challenge,” added Triano.

“Jay’s expertise, experience, passion and absolute commitment to Canada make him the ideal head coach,” said President and C.E.O. of Canada Basketball, Wayne Parrish. “Jay Triano is a great Canadian and he understands the importance of a strong basketball program and the influence that will have on the development of basketball in Canada.”