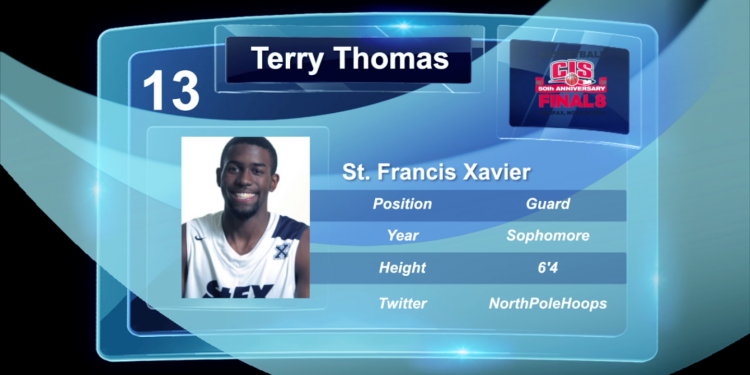 Halifax, NS— Going up against the number 3-ranked Concordia Stingers, the St. FX X-Men were able to dominate the first quarter and held a comfortable lead. From that point on they would never look back as the electrifying Terry Thomas lead the way with a game high 39 point, which he made look easy!

The X-men defeated the Stingers 98-82 in front of a large crowd of passionate fans.

“The crowd is a huge factor.  The crowd that we just had gives us so much momentum, and you go on stronger because of it,” Terry Thomas told NPH.

The high energy attack matched the intensity of the crowd as Terry Thomas and Jeremy Dunn went to work against the Stingers.  Thomas had ten points as the first quarter expired and threw down a massive one handed dunk showing off his athleticism, causing hysteria at the Metro Centre.

Thomas spoke about the fast-paced first quarter “We were just in the zone, real quick, we were running, just trying to think fast for your team, help your team out big, that’s how I think.  You want to share the rock, make the extra pass, and create opportunities like this.”

As the first quarter progressed, the X-Men started to feed off the crowd taking a 21-2 lead midway through the first.  Concordia finally started to get some offense going and battled back, still unable to break through against the St. FX interior defense.  The quarter came to a close and the X-Men had a dominating 32-15 lead.

In the second quarter it was more Thomas as he continued to go to work against the Stingers defense, racking up 19 points at halftime.  The X-Men supported Thomas with a number of players contributing to the attack as Concordia was still unable to stop St. FX.  Going into the halftime break St. FX had all but locked up the game with a lead 51-33.

While Concordia was still down by a large deficit, the Stingers were resilient and continued to hang around.  The Stingers were scoring by committee and had no player with more than ten points after the third quarter.

Thomas continued to show the full arsenal scoring nine points in the third frame to give him 28 points through three quarters. Only a sophomore, Thomas has instantly exploded on the NPH national radar with his spectacular performance.

As the final quarter approached the game was all but over as the Stingers were hanging around long enough to keep it interesting but never really challenged St. FX.

While the leading scorer was stuffing the stat sheet, Concordia never had an answer for Terry Thomas who added 9 more points to his total giving him 39 on the night in a performance which he made look easy.

Coach Konchalski spoke about Terry’s performance. “What can I say about Terry, he was all over the place tonight.  He was dominant.  When he’s on like he was today, he’s hard to stop.”

With the victory St. FX moves on to face Alberta in the championship Semi-final game.  After losing their opening game, Concordia will face Ryerson in the consolation semi-final.