Aside from one misstep against the Celtics, the Raptors entered the last week of the Bubble regular season in good shape. They haven’t been perfect on the offensive end but the hallmark of their play, their defense, is undisputed. This week they had 3 more games to tighten any loose screws and find their rhythm before the playoffs begin on Monday.

The Milwaukee Bucks have been in the title conversation since the season started. Much like the Raptors, the Bucks are deep, talented and well coached. The Raptors may have championship experience, but the Bucks are motivated by the scars inflicted upon them by Toronto in last years Conference final. This game was shaping up to be a nice preview of that inevitable rematch until the news broke that league MVP Giannis Antetokounmpo would not play. The Raptors countered by sitting Lowry, VanVleet and Ibaka giving guys like Powell (21), Boucher (23) and Matt Thomas (22) an opportunity to go off. The Bucks were vulnerable without Giannis, Toronto went to work and never looked back.

With post season seeding already decided, neither team had much to play for. The importance of this game wasn’t who won but rather that both teams escaped healthy. Coach Nurse took the night off giving Assistant Adrian Griffin a chance to shine. He sat with a resting Ibaka and Anunoby. Philly native, Kyle Lowry, led the team with 19 points in limited minutes. The Raptors shared the wealth, 12 of the 13 players that played, scored. Boucher provided more dramatics with highlight reel plays on both sides of the ball. Down the stretch, both benches were cheering on their squads to the point of hysterics. Somehow, this became the most exciting throw away game of the season.

For the last game of the regular season, the Raptors gave their bench the spotlight as they opted to rest their starters (excluding Gasol). Even in a meaningless game, the Raptors got some work in, this time focusing on getting Terrence Davis back on track. The explosive rookie has struggled since the restart, but he had excellent bounce to his step finishing with 14, 6, and 3. Boucher continued his dynamic play at the rim helping the Raptors win the rebounding battle. Gasol also looked exceptional from the point-centre position, his playmaking has blossomed as of late.

With Gasol and Ibaka on light duty, Boucher took full advantage of the extra time to show Coach Nurse that he deserves a spot as a playoff reserve. He exploded on the thin Bucks, going off from deep as well as at the rim while blocking anything that came within a 10-foot radius of his ungodly wingspan. He repeated his performance against the 76ers with another impressive showing. The Nuggets were keen not to let Boucher run wild on them but the Montreal native still led all rebounders with 9. 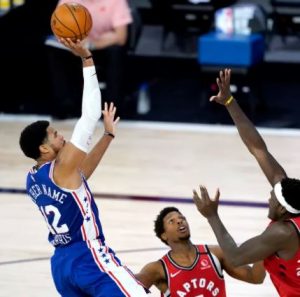 As his team fluctuates between offensive approaches, Harris has been a constant for the 76ers. The talented (and well paid) forward will be relied upon even more to produce on both ends of the floor and fill some of the void left by Simmons’ absence. Harris always had good numbers, but he has never been an impact player. The 76ers will need him to do much more to stand any chance in the post season.

Matt Thomas, a name rarely mentioned around here, had this week’s standout performance for what he did against the Bucks on Monday. He shouldered much of the scoring load from the guard position for a sitting Lowry and VanVleet, earning himself a new career high (22). Thomas shot was smooth as silk, he worked around screens expertly and had opponents chasing him for a team high 37 minutes. Shooting like this could win the Raptors a quarter or two in the playoffs.

On a team this talented, Norm will rarely be the leading man, but he can be relied upon to be one of the leagues best supporting players. This year, Norm has shaken his inconsistencies and evolved into a reliable scorer who understands his role and expectations perfectly. His three-point shot is among the best on the team, his defense is sound, and his athleticism is understated. The Raptors will need him throughout their playoff run and Norm is getting hot at just the right time.

And just like that, the playoffs are here. Toronto will begin their post season trials against their once rivals, Brooklyn Nets. The Nets are not yet a finished product, but they have talented pieces that could do damage on any given night. Toronto should have their way with Brooklyn in what is projected to be a short round. The Raptors have been playing well but expect their game to be taken to another level on Monday.