The Raptors have unlocked the Bucks 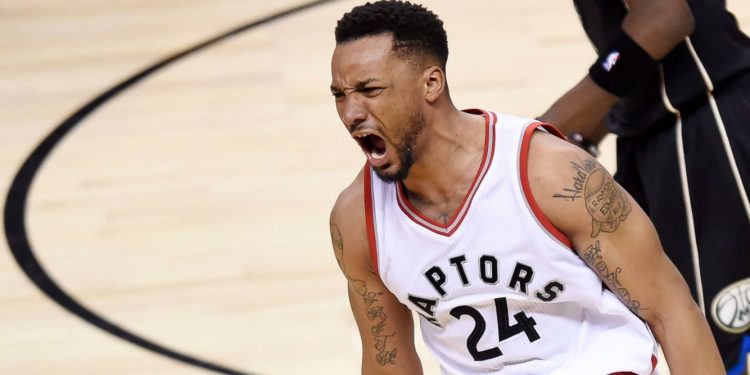 The Milwaukee Bucks were all-in before the series even started. By starting two rookies, and having Thon Maker and Tony Snell as their frontcourt, Jason Kidd tried to force Toronto Raptors head coach Dwane Casey’s hand.

Either start Jonas Valanciunas and force-feed him early on to take advantage of Maker, thus keeping the Raptors away from their traditional offence that funnels through DeRozan and Lowry, or move Valanciunas to the bench and gamble on a new starting lineup that would no longer have a size advantage.

Initially, Casey did neither, and the Raptors paid the price.

Thon Maker and Tony Snell had Jonas Valanciunas and Serge Ibaka out on the perimeter, negating any advantage the Raptors had on the boards. Over the course of those first three games, the Raptors averaged 45.7 rebounds per game to the Bucks 43. The Raptors were so concerned about their transition defence that they ignored offensive rebounding, and allowed the Bucks to post an 86 per cent defensive rebound percentage. After the acquisition of Serge Ibaka and P.J. Tucker, the Raptors finished the remainder of the regular season at 25.5 per cent in offensive rebound percentage, fifth in the league. They went from that to worst in the playoffs at a rate of 13.4 per cent.

This was a case of size not translating into strength. With both bigs out on the perimeter, the likes of Giannis Antetokounmpo, Khris Middleton, and Malcolm Brogdon broke down DeMarre Carroll, DeMar DeRozan, and Kyle Lowry far too easily. The Bucks had the speed and quickness advantage, and it left the favourites in the series always a step behind to the tune of a defensive efficiency rating of 109.3.

After a 104-77 blowout loss in Game 3, the Raptors were backed into a corner, and Casey into desperation mode. Serge Ibaka slid over to centre and Norman Powell replaced Valanciunas in the starting lineup, and now the Raptors are back on course.

The changes have now negated the Bucks speed and quickness, ratcheting up their defensive ability to levels that became customary during the regular season, and allowing for more room to operate on the offensive end.

In the clip below, Ibaka shows his ability to space the floor and eliminate the Bucks desire to trap and scramble to protect the paint. Immediately after that, he shows his value in being able to switch on the pick-and-rolls onto Antetokounmpo, and staying with him on the drive. Finally, his mobility also allows him to get ahead of Maker for a wide-open path to the basket, and even though he misses the dunk, it speaks to the value Powell brings as an extra ball-handler and floor spacer.

The Raptors shot just 37 per cent from the field in Game 4, but limited their opponent to that same mark as well. They outrebounded the Bucks 40-23 in Game 5, and didn’t allow a second-chance point. Their defensive rating has dropped almost 20 points to 89.2.

The offence also came to life in Game 5, where they made 41 shots on 57.7 per cent shooting and 28 assists. Whereas before the Bucks were able to use their length to either deflect or force Toronto’s stars to loop their passes over and give enough time for the Bucks defenders to retreat back, seeing the traps over and over have probably helped the Raptors identify where the help defenders are coming from and make the read quicker. Jason Kidd noticed the difference.

“We gotta use our length. We gotta do a better job — they can’t throw fastballs, if they’re gonna throw fastballs against our defence, it’s gonna put us in harm’s way and that’s gonna lead to them shooting open threes or driving in and finding the open guy.”

“Each game is going to be different. I think we have to be ready to adapt to whatever the game brings, whether it’s a defensive game or offensive game,” said Casey before Game 5.

Norman Powell scored a playoff career-high 25, and is now 7-for-7 from long distance. He has thoroughly outplayed Khris Middleton since being assigned the matchup, and has swung the series by sheer force of will. Middleton has shot just 7-for-21 in the past two games, including blanks on all five of his 3-point attempts. Casey deserves credit here, as he could have gone with Tucker or Patterson to start, but opted for the seldom-used former UCLA guard instead.

The Bucks have it all to do in Game 6, but unlike the Raptors going into Game 4, they don’t really have another hand to play. They could take things to a complete extreme by perhaps starting Antetokounmpo at centre and squeezing someone like Mirza Teletovic or Michael Beasley onto the floor for more scoring threats around the Greek Freak. But that move doesn’t really force the Raptors to change anything.

As alluded to earlier, this new starting lineup is equipped to play any style and matchup with anyone, and with Casey arriving at the right combinations before it’s too late, the Bucks will be hard pressed to find a way out of their current hole.

Sean Miller-Moore is a FREAK ATHLETE – ...