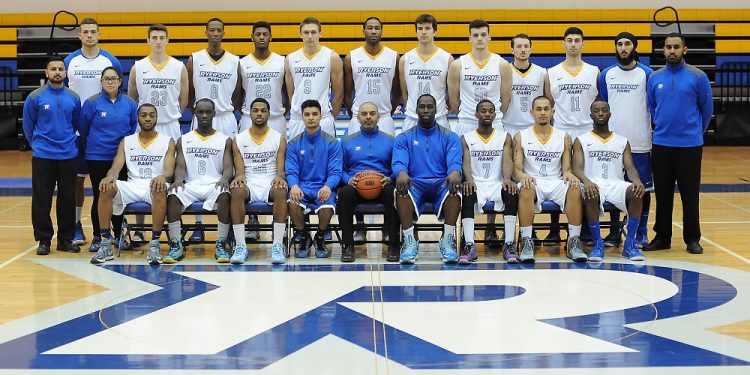 TORONTO, ON—Roy Rana is notorious for always believing in the process, choosing the long view over riding the highs and lows and the whims of the moment. “When the time comes to prepare for the national championship,” he tells NPH, “we’ll prepare for that.”

But even Rana, head coach of the Ryerson Rams, knows that this season has been different in some ways. The Rams’ ticket has been booked since the mighty Carleton Ravens hoisted yet another W. P. McGee Trophy to end the 2013-2014 season. “It’s not like we’re given a gift,” Rana says, “and then trying to shock people in March.”

Ryerson is hosting the 2015 Arcelormittal Dofasco CIS Men’s Basketball Final 8, set from March 12-15, and is guaranteed a ticket to the dance as the host team. The key is to deserve the invitation, and Rana surely believes that his Rams do. “We all understand and know that we’re good enough to win it all,” Rana says. “We’re legitimately a contender.”

If the team’s head coach (admittedly not the most objective person) may not convince you, then look at the standings. At 17-2, the Rams finished the season on an 11-game winning streak and have just completed a regular season where they were ranked, wire-to-wire, at No. 3 in the CIS.

They have the fourth-best offense and fourth-best defense in the CIS—a combination that only the Ravens, with their third-best offense and the very best defense, can lay a claim to. “Our roster, for the most part, has played really, really well,” Rana says. “We’ve had more than one or two guys involved in this success. It’s been a full team effort.”

Ryerson can stymie you defensively, as it did against the Western Mustangs in an 81-47 win, or outgun you behind the prowess of point guard Jahmal Jones, shooting guard Aaron Best and a slew of other slashers like Adika Peter McNeilly and Jean-Victor Mukama. The team can also do a bit of both, as it did against the York Lions in a 99-74 win.

It’s easy to forget it now, but this will not be the Rams’ first trip to the Final 8 under Rana, as Ryerson was among the country’s eight best teams in the 2011-2012 season and made the trip to Halifax. (The team lost in the first round against the Alberta Golden Bears.)

To be fair, the team was likely among the CIS’s eight best in the two seasons since, but couldn’t quite clear the Ottawa hurdle and suffered a four-point and a one-point loss at the Gee-Gees’ Montpetit Hall both times. (The CIS would agree. The Rams finished the previous two seasons ranked No. 9 and in a tie for No. 8.)

But while that trip to Halifax two years ago was a little ahead of schedule, this one isn’t. Rana has invested a lot, personally, in the event and feels a responsibility. “I have a real personal stake invested,” Rana says, “in making sure that this is a great event and that our fans show up.”

On the court, the Rams have come together and play with an assurance that can only come from the maturity and the assurance that they’re the one team whose place at the Final 8 is guaranteed no matter what. “The 12 guys that dressed [tonight] are all good enough to start in this league,” point guard Jahmal Jones told The Eyeopener after the Rams’ win in the playoffs over the Wilfrid Laurier Golden Hawks on February 28. “We expect nothing but the best from our bench.”

The Rams haven’t lost to any team that wasn’t ranked in the top 2 of the CIS Top 10 rankings and will go as far as the winningest players in Ryerson history take them. Seniors Bjorn Michaelsen, Jordon Gauthier and Jones are the rock upon which the Ryerson program has been built, the reason why so many of the Rams now hail from Ontario when this wasn’t always the case. Rana says that, “They’ve transformed and reshaped the Toronto basketball scene.”

Rana speaks fondly of the five years that he spent coaching this trio. “For me, that’s what I take the most satisfaction from,” he says, “watching them grow as young people and really mature in a nice way.”

He will also get to watch them unfold hell on opposing teams for a few more games—first at the Wilson Cup and then back home, at the Mattamy Athletic Centre, for the CIS Final 8. “It would be fool’s goal for me to look at anything other than our game [against Laurier],” Rana says.

The Rams’ head coach spoke about one specific game, but he could have been talking about just about any of the remaining ones.

Correction: An earlier version of this story had that Ryerson made the trip to Ottawa for the CIS Final 8 in 2011-2012. But that season, the event was in Halifax.