Raptors Keys to Game 5…and the Rest of the Series 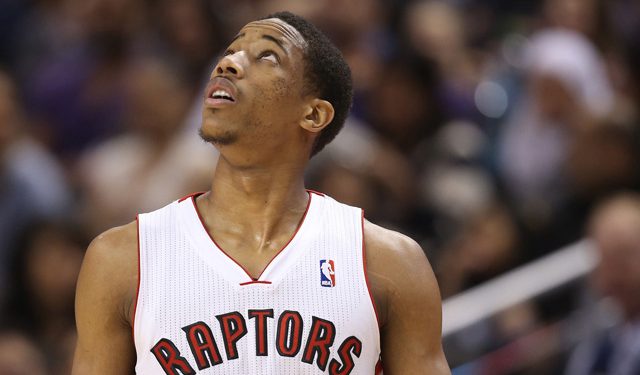 The first round playoff series between the Toronto Raptors and Brooklyn Nets is tied 2-2 as this best of seven series now shifts into a best of three.

It has been an incredible back-and-forth, cant-miss series thus far, and game five promises more of the same.

Here are the Raptors keys to game five, as well as the rest of the series.

He may have been late, but at last he’s here. First game aside, (we’ll chalk that up to first time playoff jitters) Demar Derozan has looked every bit the all star he was this season. He has shown skeptical Nets fans this -who chanted “overrated” during Brooklyn home games-by putting up 30 points in both games two and three, and 24 points in game four. While he still takes a few inadvisable shots each game, they can be excused when he forces his way through defenders, finishing at the rim, or drawing fouls. Derozan has made it to the free throw line 48 times this playoffs, hitting 42 of those shots (both of which leads all NBA players this playoffs) for an incredible 87.5% free throw percentage. His midrange jumper-which he relied on a bit too much earlier in his career- has been an incredible compliment to his game. Derozan’s offence has carried the team through stretches where other key players were missing shots and getting into foul trouble. Barring injury, there’s no reason to think his strong play won’t continue. Simply put, taking away game one, Demar Derozan has been the MVP of this series so far.

Demar Derozan was the all-star in 2013/2014, but anyone who watched the Toronto Raptors knows Kyle Lowry was their MVP. However, Lowry has been good, but not great so far this series. He is below his seasonal averages in FG%, 3PT%, APG, and has a worse turnover ratio than he did during the season.

Small sample size has to be taken into account, but much of it can be attributed to playing through a bruised knee, an ailment he has been struggling with for much of the playoffs. Despite the knee soreness, Lowry was still impactful despite limping as early as the first quarter in the Raptors 87-79 game four win over the Nets.

Two days of rest between games four and five could be just what the doctor ordered. What we have not seen is a dominant Kyle Lowry performance like he has treated fans to so many times this season. In front of a home crowd, with the momentum shifting back to the Raptors, a big game from the point guard could be the difference between a win or a loss in game five.

Jonas Valanciunas and the Raptors dominance inside

The Brooklyn Nets’ struggles to defend in the paint and rebound are well known. The Nets were second-last in the NBA in team rebounding, third-last in blocked shots. Without Brook Lopez in the starting lineup, Nets head coach Jason Kidd thrust Paul Pierce into the power forward role in an attempt to stretch out defenses, while old man Kevin Garnett starts at centre. The moves have contributed to overall success for the Nets, but it leaves a lot to be desired when the team is up against bigs who can battle, and score inside.

In the Raptors’ 100-95 win in game two, this trio added 43 points and 26 rebounds. For the Raptors to be successful, they need to dominate in the paint like that. Defenders like Garnett, Mason Plumlee and Andray Blatche are experienced and physically tough but are not as skilled and quick to keep up with the Raptors big men.

While plays will not often be run for Amir Johnson, the veteran power forward will often battle for loose balls and open rebounds. Garbage points and garbage rebounds are points and rebounds nonetheless. Patrick Patterson is more of a stretch power forward and doesn’t always hang around the paint. That leaves Valanciunas, the only true centre in this series. JV’s scoring has steadily dropped (17 in game one, 15 in game two, 10 in game three, 6 in game four) and that is partially due to decreased minutes because of foul trouble.

However, when Valanciunas is on the floor, he is an active player who is always looking to set screens or gain inside position on the offensive end. The Raptors need to feed Jonas, something they did in the first two games, but haven’t done much since. While his offensive game is far from refined, it is still strong enough to cause headaches for any of the Nets bigs.

Terrence Ross and the missing 3-pointer

The three pointer has been a HUGE part of the Toronto Raptors offense this season. So where has it gone? Credit has to be given to the Nets perimeter defense. Check out how they have contained the Raps, who were the 8th best NBA team in three point scoring this season:

The Raptors have found ways to win in this series without relying heavily on three point shooting. Lowry’s shooting woes may once again be attributed to his knee problems, but he still finds other ways to score. Derozan has never been a good three point shooter, but his ability to hit mid-range shots, take the ball to the basket and draw fouls at will, makes him a valuable scorer.

Greivis Vasquez has been one of the Raptors most consistent shooters all year, and has continued to shoot adequately in the playoffs. But how does one explain Terrence Ross? Ross was the Raptors best three-point shooter this season, but his offensive game has fallen off the earth in the playoffs. Maybe it’s his playoff inexperience showing or the Nets stingy perimeter defense, but for the Raptors to be successful in game five, and the rest of the series, they need their starting wing to hit his shots when he’s open and when they swing the ball around the arc. At the very least, Ross needs to shoot better than 16.7% from deep. Toronto Raptors head coach Dwane Casey has said he is going back to Ross as a starter for game five.

Game five between the Toronto Raptors and Brooklyn Nets will be played Wednesday April 30th at 7:30 p.m ET at the Air Canada Centre.