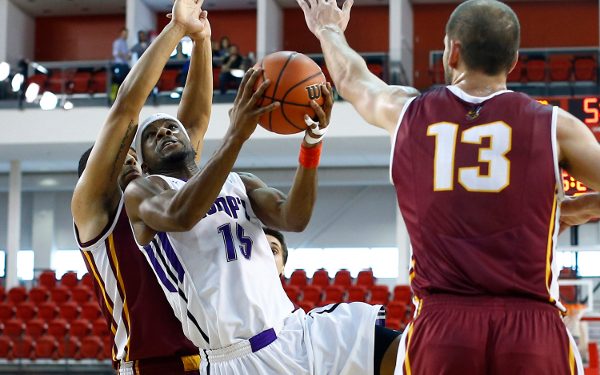 QUEBEC CITY, QC – The Bishop’s Gaiters didn’t lose the recipe to beat Concordia. After taking down the Stingers in all four matchups this season, and eliminating them in the RSEQ semi-final last year, they repeated the feat Saturday in a 74-59 win.

It appears the recipe consists of rebounding and a lot of defense. Mukiya Post was a big story coming into the game. The ex-Gaiter had scored over 30 in three of his last four games, including a 31-point performance against Bishop’s on February 21st. He found himself running into a wall this time, managing only 8 points in 31 minutes of play.

“We paid a lot of attention to him in our scout, but I think we were fortunate that he got a couple of early fouls which took him out of rhythm”, said Gaiters coach Rod Gilpin. “We did a pretty good job the rest of the way.”

With Post being limited, Jean-Andre Moussignac stepped up big time for the Stingers. He was 4 of 6 from deep in the first half (finished 6-13) to keep his team in the game, with Zach Brisebois also chipping in 8 points and 8 rebounds.

On the other end, the big men trio of Mike Andrews, Matt McLean and David Bélanger went to work. Especially McLean, who amassed 11 points, five boards and three assists in the first half. “He’s the guy who really flies under the radar, who does a lot of things to help our team and doesn’t get much recognition”, said Gilpin.

Bishop’s had the lead 36-34 at halftime, and back from the break it was still tight.

Moussignac and Chmielewski kept creating offensively, but the Gaiters simply would not let go of their lead. They got easy baskets inside, controlled the glass and eventually blew it open in the fourth quarter en route to a 74-59 victory.

“Our veteran guys really stepped up and I think we got good contribution from some rookies when we needed to”, said Bishop’s coach. “I also thought that, in the second half, Mike Andrews, Jona Bermillo and Onnex Blackwood gave us what they didn’t give us in the first half.” All three players finished in double digits along with McLean.

“They simply executed better”, said Stingers coach John Dore. “We missed a lot of opportunities too. We had fouls to give, for example, and we didn’t take them when we had the opportunity to take them.”

“We will have to get better and get more guys who really compete”, he said of his team going into the off-season.

The game, however, ended on a scary note. While soaring for a dunk in semi-breakaway with less than a minute left, Mike Andrews got hard-fouled by Zach Brisebois and fell on his back. The six-foot-ten senior seemed fine though, and after a heated exchange, both coaches came to the conclusion that it wasn’t intentional.

The Gaiters will need Andrews for sure if they hope to dethrone the Redmen in the RSEQ final this year. “McGill has had their way with us this year, but I think we’ve started to come together the last couple of weeks and I’m happy with how we’re playing”, said coach Gilpin.