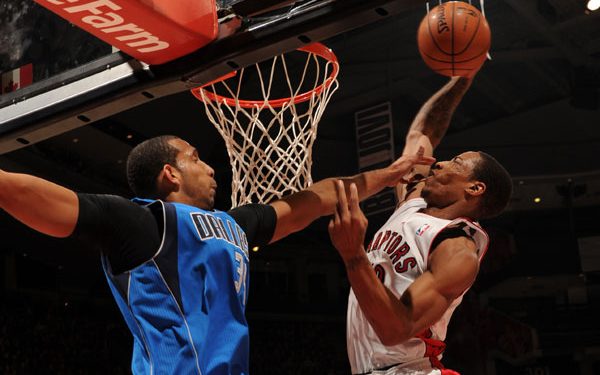 TORONTO,ON–Demar Derozan had a career night when the Toronto Raptors needed him most.

Coming off two disappointing losses, the threat of falling below .500, and Kyle Lowry’s worst offensive night of the season, Derozan put up a career high 40 points to lead the Raptors to a 93-85 win over the Dirk Nowitzki-less Dallas Mavericks.

It was an up and down affair on Wednesday night, with the Raptors trailing by more than 20 early on and playing from behind for most of the game. Greivis Vasquez and the second unit played an important part in sparking the Raptors offence after they came up flat in the first quarter. The Raptors trailed 34-15 after the first, with Derozan scoring 12 of those points. Coach Dwane Casey told reporters after the game that he thought it was going to be a blowout.

“Our starts are concerning,” Casey said, “but in the second half, we got the game back under control and got defense in the game.”

Vasquez was the difference maker off the bench especially with Lowry struggling. He scored 11 points in the second quarter, helping the Raptors claw back to a 51-46 score for the Mavericks at the end of the half. Vasquez finished with a Raptors-high 17 points, to go along with six assists. His big second quarter led to a third quarter surge- with Derozan leading the charge adding 15 points in that frame.

Kyle Lowry had a frustrating game, scoring a season low three points, adding five assists and three rebounds while shooting 0-10 from the field. In his post game interview, coach Casey told reporters Lowry was battling a stomach flu, and was running to the locker room during the game. But in Lowry’s absence, it was Derozan who stepped up. He added three rebounds and three assists, to go along with his 40 points, while shooting 15-22 from the field and 9-14 from the free-throw line. Derozan said in his post game interview, that he knew the pressure was on when Lowry fell ill.

“Once I saw Kyle with his head hanging and holding his stomach, I knew he wasn’t feeling too well,” Derozan said. “I just told myself to try and do as much as I could to win.”

Despite struggling over the past couple games and early on in Wednesday’s win, Jonas Valanciunas received some important minutes from coach Casey. Valanciunas put up a double-double with 12 points and 10 rebounds in 25:40 on the court.

Wednesday night’s win also marked the return of two former Raptors. Jose Calderon was warmly received by fans at the Air Canada Centre when he was introduced as a starter. Calderon finished with 13 points and five assists. Meanwhile, Vince Carter was treated to mixed reactions from Raptors fans, a vast improvement from the usual heavy boos he receives when he returns to Toronto. Vince was solid off the bench for the Mavericks, especially early on.  There were flashbacks of Air Carter when he slammed down a thunderous dunk on Demar Derozan in the first quarter. Carter finished the game with eight points and four assists.

Game Notes: Don’t let the score sheet fool you. Chuck Hayes played another strong game for the Raptors. The veteran big man did not score, but grabbed five rebounds to go along with three steals. His positioning on both ends wreaked havoc for opposing bigs all game long, helping the Raptors during their second half surge.

The win gets the Raptors back above the .500 mark with a 21-20 record as they inch closer to the halfway point of the season.  The Raps’ next game is in Philadelphia against the 76’ers (14-28) on Friday.